CDMX (Times Media Mexico) – Luis Cardona, correspondent for La Opción in Chihuahua, stood up, showed his cell phone and affirmed that the photo of Ovidio dressed as a soldier is authentic. It was his first day at the National Palace, commissioned to cover President López Obrador’s morning lectures. But in reality, he has more than 40 years in journalism. 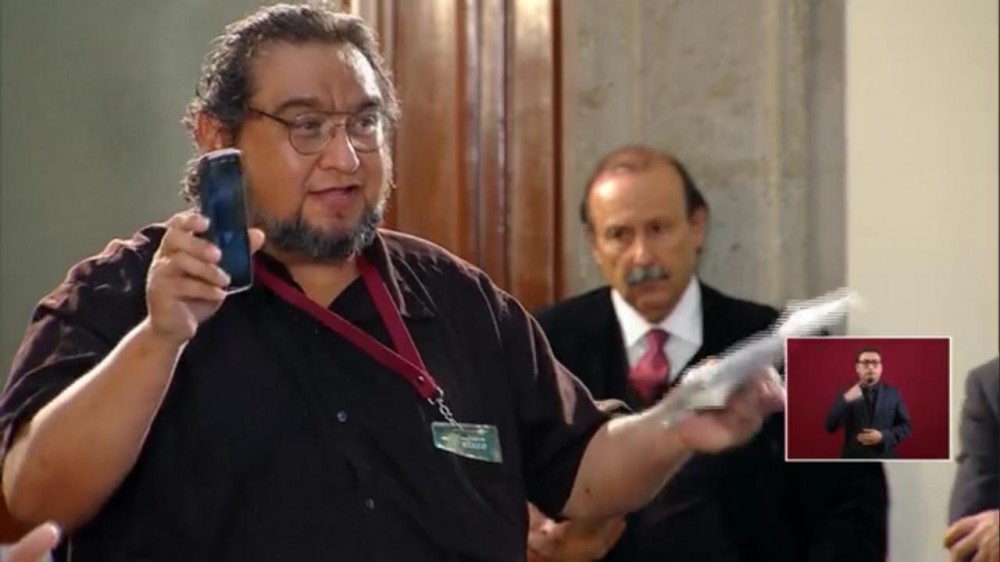 He is one of the displaced journalists from the state of Chihuahua who lives somewhere in CDMX. He was kidnapped, tortured and beaten at Nuevo Casas Grandes. He told AMLO, face to face, he was lying and he – Cardona- had the authentic photograph, sent to him from Sinaloa, as well as audios, about the negotiation for liberation.

In the image, published by the newspaper La Jornada, you can see a young man sitting in the back seat of a Humvee, dressed as a soldier, with his face half covered, which was said to be Ovidio.

That statement bothered the president himself, the secretary of security, Alfonso Durazo, and the spokesman, Jesus Ramirez. In the end, AMLO, visibly upset, quoted a phrase:

“You bite the hand of the one who took away your muzzle,” he said.

That went deep among those journalists present in the National Palace and among those who watched the “mañanera” through social networks. “The president lost it”, many journalists said, “he just called us dogs” others said… Luis Cardona also told Alfonso Durazo that he was a liar.

“All of Mexico saw the Security Secretary lie at the press conference, the afternoon of that day, of the “culiacanazo” in front of the cameras. The most ridiculous statement was to say that Ovidio Guzmán, son of El Chapo, had been arrested during a preventive patrol, almost routine”. … Luis Cardona explained.

In the Social Communication department, they said that the correspondent of La Opción de Chihuahua, Luis Cardona, had broken all canons: that he spoke without a microphone, stood without permission, interrupted the president, was very aggressive and did not understand the set of rules he signed when he was given his accreditation badge.

“We can no longer allow him to enter,” said a collaborator of Jesús Ramírez, “He became very aggressive, he disrespected the president, he shouted, he disobeyed the rules and became a threat”.

Luis Cardona said his case is an attack on freedom of expression… After social networks went crazy against AMLO´s government, the journalist credentials were returned to him later in the evening.