Aeromexico pressures pilot who asked AMLO to build the new airport in Texcoco.

Aeromexico requests report from pilot who asked AMLO to build the new airport in Texcoco. 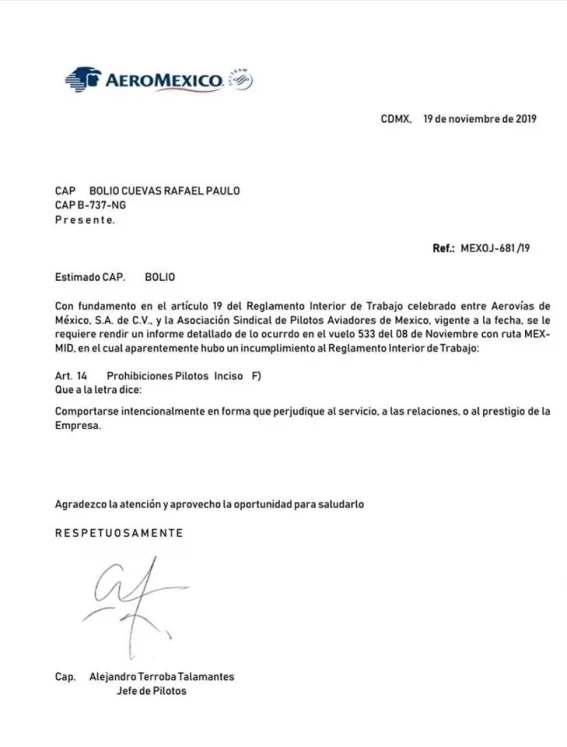 “Welcome Mister president… Hopefully we can convince you to build the airport in Texcoco,” said Captain Bolio through the speaker of the aircraft which was celebrated by some of the passengers with an applause.

Apparently, that must have upset the president since his government “unofficially” requested Aeroméxico to investigate the incident.  In order not get in a confrontation with the president, the airline points out that there was a breach of its “Rules of Procedure” so it asks the pilot to submit a detailed report of what happened on that flight.

Aeromexico said in a statement that Captain Rafael Paulo Bolio Cuevas, who confronted President Andres Manuel Lopez Obrador (AMLO), so far, still performs his duties normally with the airline, however, it reiterated that the company is governed by a “Code of Conduct and protocols” established by both the regulatory authority and its internal regulations.

Article 14 of “Aeromexico’s Internal Work Regulations” establishes the prohibitions for pilots: (must not) intentionally behave in a manner that harms the service, relationships, or prestige of the company. 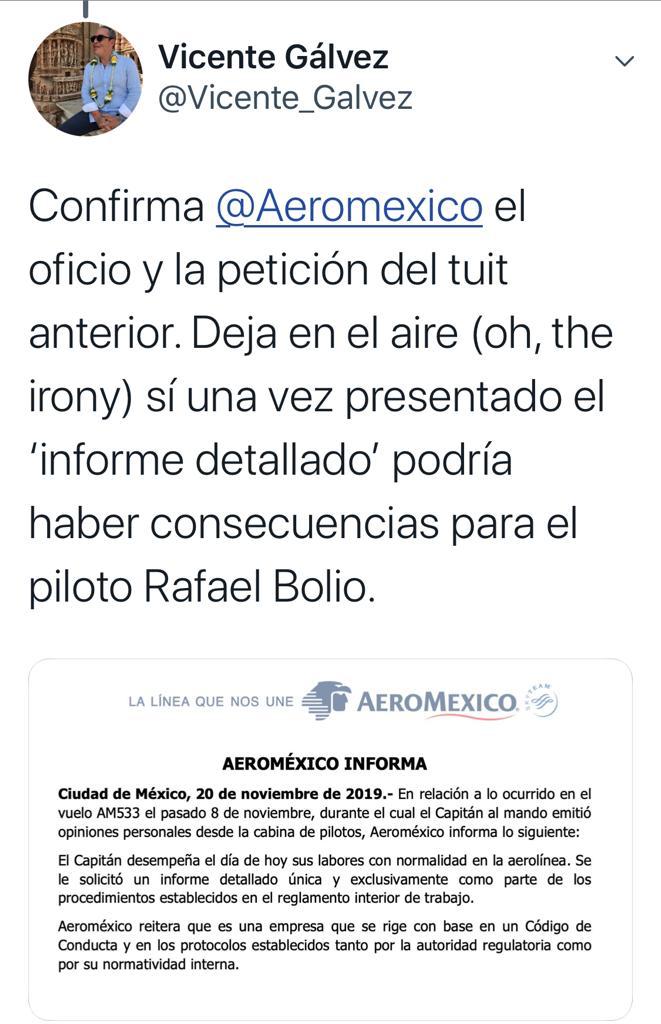 If the company is pressured by the government could suddenly decide that Captain Bolio went against its internal regulations and could be fired as it has happened with others who have openly dared to question the president.

Only in Mexico military pilots are awarded for bringing a dictator –who fled after committing electoral fraud in his country– and a commercial pilot, who represents the feelings of millions of Mexicans, expressing a respectful opinion is bullied and intimidated by AMLO´s government, trying to restrict his freedom of expression.

AMLO could have been a builder of the future, yet he decided to be a destroyer of the past and the present. He swept away very important works and public institutions without hesitation. He had to show, like a bully or a thug, who rules the neighborhood. The future, according to his vision, can wait. For him, what is important is to destroy… not to build.

President Lopez could have been a call for national harmony, for the unity of Mexicans to build the best common causes. On the contrary, HE IS DETERMINED to be a permanent leader of the division among Mexicans.

Let´s hope this pilot is not fired, Mexican society is about to have enough.