These are a some of the most traditional foods associated with the “Day of the Dead” season in Mexico. These dishes are only prepared and eaten at this specific time of year, since they are also placed on the altars as offerings for the spirits who come back to visit their loved ones.

On these days the souls of the departed consume the essence of the foods that are laid out for them. After the holiday has passed, the living ​dismantle the altar and eat the foods.

The Mexican holiday of the “Day of the dead” is a syncretism between the Catholic religion and the native Mesoamerican beliefs and customs, the foods are an extension of this syncretism developed by the combination the ways of cooking. The traditional with the European. 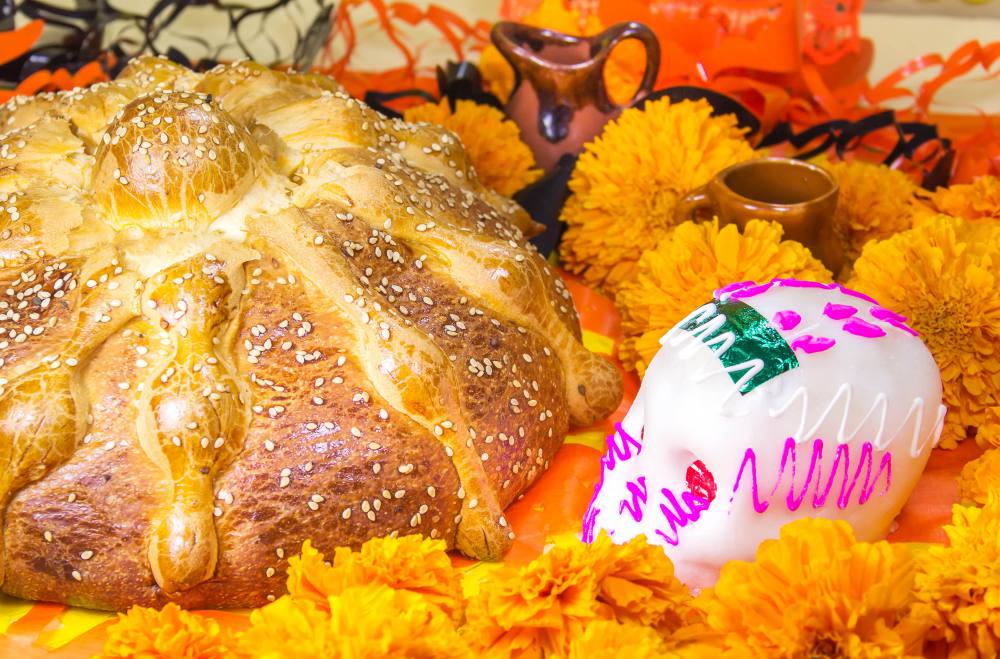 06 – Pan de Muertos – Day of the Dead Bread
“Pan de Muerto” is a type of bread prepared and eaten during the Day of the Dead season. It is an essential element of the altar, and perhaps one of the food items most associated with the holiday. The type of bread varies from region to region in the country, most commonly is a round, sweet bread flavored with anise and decorated with shapes on top which are suggestive of bones, it is sprinkled with sugar and cinnamon. Since wheat was introduced by the Europeans, it was not present in ancient Mesoamerica. The significance of bread in the Catholic religion as symbolizing the body of Christ may be a factor in the importance of bread for this holiday. The bread is said to represent the deceased.

05 – Mole Negro
The dark and handsome mole. With rich coffee and chocolate overtones, describing mole it´s like describing a complex red wine. Mole is an intricate dish that requires many ingredients, many of which are toasted, roasted and then ground together. There are many different kinds of mole, but black mole is traditionally reserved for special occasions because of the labor and time-intensive preparation. This is a very traditional dish for Día de Muertos in Oaxaca.

04 – Mexican hot chocolate
Xocolatl is the prehispanic Nahuatl name for chocolate, from which must languages derive. It is native to Mesoamerica. The beans were ground and consumed in prehispanic times reserved only to nobility and priests. Unlike today, the cacao was ground on a metate (grinding stone) without any sweets. Now it is a costume of The Day of the Dead season as the weather starts to get colder, and hot drinks are favored as well as other corn-based drinks such as atole or champurrado. It is typically placed in the altar. 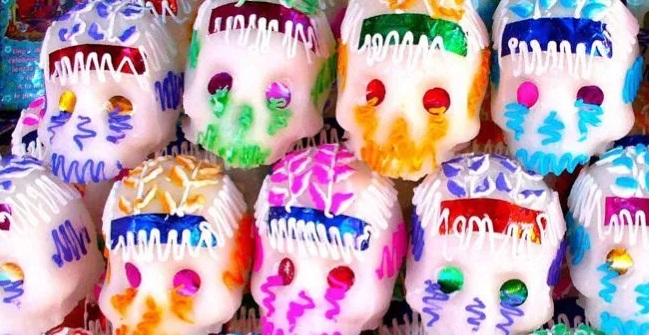 03 – Sugar Skulls
Skulls were a frequently-used design element amongst cultures such as the Aztecs and the Maya. The human skull was a symbol of life and death, and skulls were displayed on racks, or walls called “tzompantli”. The significance of these skull racks were ritualistic, used to demonstrate military dexterity. Since sugar was introduced to the Americas until the 17th Century, in ancient times skulls were shaped out of amaranth. Nowadays different variety of sweet skulls can be found such as amaranth, cotton candy, In some parts of Mexico these sugar skulls are placed on the altar but are not eaten. In other places, they are commonly given to children as a Día de Muertos snack.

02 – Day of the dead fruit offerings – In Maya, “Xec” – The “xec”, which in Mayan means “mixed or scrambled”, is a salad or fruit cocktail that is prepared and enjoyed during Días de Muertos or Hanal Pixán. It is a mixture of jicamas, grapefruit, mandarin and “chinas” (that’s how sweet oranges are called in Yucatan). These fruits are seasonal, as they are mostly citrus and it is in the autumn and winter when they are most abundant in the region.

Salt and red dry chile is added to the mix, creating and explosive taste when mixed with the citruses. Xec, is the usual dessert after eating the pib. 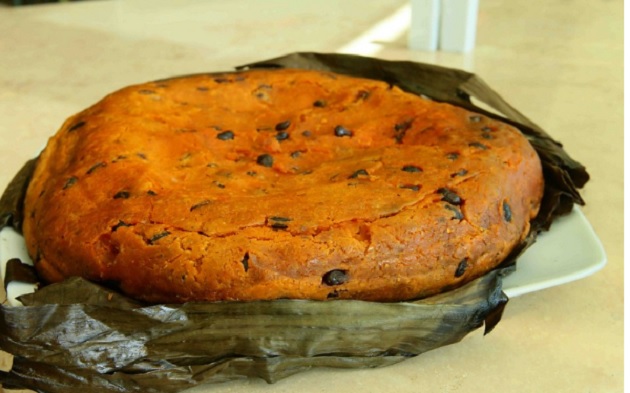 01 – Mucbipollo
Yucatán´s most important food for the holiday is the “mucbipollo”. The name of this dish is a composite Mayan and Spanish words. In Maya: Muk means “to bury” and Bil that means “to stir”. The two words together: Mukbil, literally mean: “that has been buried”. Mukbil-Pollo (Pollo – chicken) means “Chicken that has been buried”.

Yucatecos despise this comparison, but to certain extent,  the “mucbipollo” is similar to a tamal except it is much larger than a normal tamal and of a crunchy exterior. It is made with corn dough and chicken, even though some people also add slow-roasted pork to it, wrap it in banana leaves, to then cook it in an underground pit called a “pib”. In more modern times, people cook this food in either a regular oven at home or a wood-fired oven.