A 300 thousand pesos reward is offered for information that leads to the capture of the ‘Monster of Toluca’, a dangerous and bloodthirsty serial killer that could be currently residing in Mérida.

The Attorney General of the State of Mexico informed a reward of up to 300 thousand pesos is offered to anyone who can provide useful, truthful and timely information for the location and capture of a serial killer known as “El Monstruo de Toluca” (The Toluca Monster).

The Mexican authorities said that Oscar García Guzmán, 28 years old, of slim complexion, approximately 1.70 m (5 “8”) tall, light brown skin, short black hair and brown eyes, who is known as the ‘Monster of Toluca’, is dangerous and has been confirmed a bloodthirsty serial killer, could be in Mérida.

This dangerous criminal is wanted for the killing of three young women, one of them Jessica Jaramillo Orihuela, 23, who was reported missing and whose dead body was found on Friday November 1st.

Jessica was found dead in a home in Colonia Santín, in the city Toluca (state capital of Estado de México), and inside the same house, the bodies of two other women between 20 and 25 years old, were found as well, the three of them were violently murdered by suspect Óscar García.

The Yucatan State Investigative Police presume that the suspect is in Mérida, Yucatan, as a woman identified as Yadira Estaefanía claimed to have seen a subject that matches the description, on Sunday November 3rd, walking the streets of northern Mérida, along García Lavín Avenue, in the direction of Plaza Altabrisa. 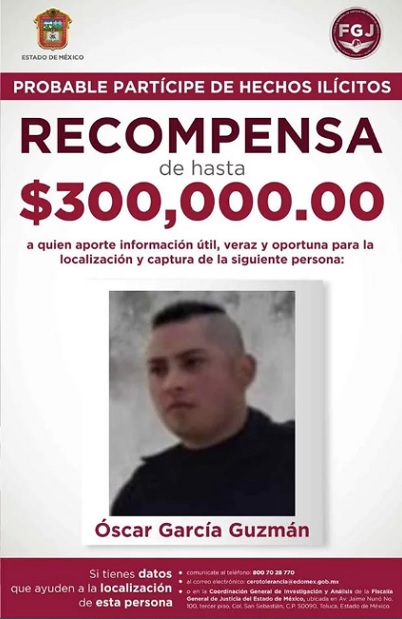 For this reason, law enforcement authorities from the State of Mexico have requested the collaboration of their Yucatecan colleagues, to delve into the investigation and find the whereabouts of this potentially dangerous man, who is still at large, and could be roaming the streets of the “White City” as you read this.

So, if you happen to see a man that matches the description, don’t hesitate to call 911 and alert the police, because this man is dangerous and we definitely don’t need him starting a killing spree in our beloved Mérida.

The Yucatan Times Newsroom with information from SSP