Donald Trump said on Wednesday that he has plans to build a wall in Colorado, even though the state does not share a border with Mexico.

He continued to say that walls were also being built in New Mexico and Texas, which, along with California and Arizona, are the only U.S. states that share a border with Mexico.

“We’re not building a wall in Kansas, but they get the benefit of the walls we just mentioned,” he added.

As CBS Denver reported, there are currently no reported plans of a wall going up in Colorado, though construction has begun in Texas for new segments of a border wall there.

Trump famously made building a wall along the U.S. border with Mexico one of his primary talking points during his 2016 election campaign.

Colorado lawmakers were not impressed with Trump’s comments on Wednesday. 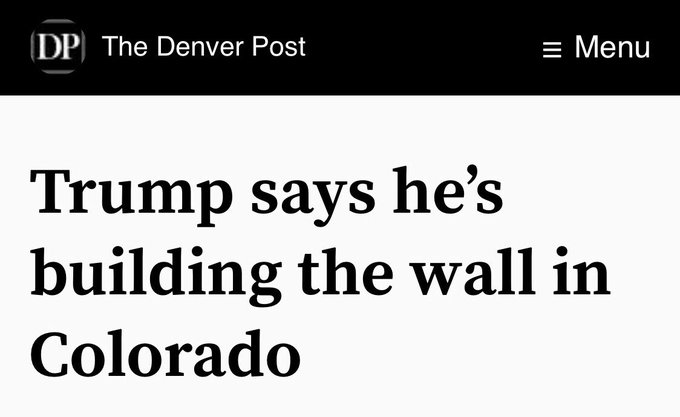 Colorado Senator Michael Bennet added on Twitter, “Let me repeat: There isn’t an elected leader from the state of Colorado who would support using eminent domain to steal the property of our farmers and ranchers to build a medieval wall.”

“Is NEW Mexico gonna pay for it?” Representative Diana DeGette tweeted, referencing Trump’s insistence that he will get the country of Mexico to pay for the wall he wants to build.

In September, the Pentagon diverted $3.6 billion in funds for military construction to be used to pay for 11 projects along the border with Mexico, CNN reported at the time.

The Senate has been trying to overturn the national emergency that Trump declared earlier this year in order to divert the funding, but after multiple votes has not been able to get enough to block a presidential veto, per the New York Times.