The year was 2011. Steve was recently divorced, recently retired, and recently come to live with brother Joel in a small apartment in Mira Mesa (San Diego), California. Steve was now rid of Chase Bank, his personal/professional nemesis for so many years.

Joel, a victim of the 2008 financial crash, still worked there – the only place hiring, because… well, we bailed them out, didn’t we? Too corrupt to fail. One day while smoking cigars and drinking Scotch, Steve uttered a most fateful declaration: “I’m going to leave the U.S.  I’m going to Merida, capital of The Yucatan in Southern Mexico. I’m going to travel the world taking photographs.” To which Joel instantly (perhaps rashly) replied: “Me too.”

The rest is history. But, a history ripe with great adventures, amazing events, fascinating people, and scenery so astounding it’ll knock your socks off.

April 5th 2012, we arrive in Merida speaking no Spanish whatsoever. Knowing virtually nothing about the country or the city in which we have chosen to live, prospectively for about 6 months.

Our first attempt at Spanish is disastrous: “Mi Español no es Bueno”. Which may mean: My Spanish is not feeling well. As suggested by one immediate response: No shit, Sherlock. We have already booked an apartment in advance, and the manager (a lovely young lady) speaks English well enough to offer us both a cordial greeting and a sincere welcome. We tell her we might stay perhaps a year. She laughs. You’ll be out in two months, she says.

Seriously, this becomes the first phrase in a repetitive traveling repertoire we build dramatically over the next few years. Soon to be followed by: God, I love this breeze. We need breakfast, but it’s early. We wander the beautiful Paseo Montejo – Merida’s scenic, extra-wide boulevard – counting all the places we find closed. One little café – La Boheme – is open, boasting tiny tables with umbrellas on a patio beside the boulevard. And a proprietor who speaks English. So, we sit.

Alex explains much of what we need to know to make our way in Merida. We tell him where we live. He says: You’ll be out in two months. You’ll find a house at a fraction of the price. I’ll help. He’ll also take us to tour some local ruins. Two new friends –  in just two days. 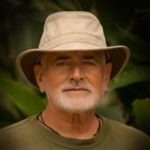 Joel R. Dennstedt, born and raised in San Diego, California, lived 15 years in Alaska. He is the author of ORANGE CAPPUCCINO, his debut novel, HERMIT, GUANJO and IN THE CHURCH OF THE BLUE-EYED PROPHETS amongst other literary works… In 2012, Joel embarked on a lifetime journey to travel the world. All of Joel´s books are available on Amazon, Kindle, and Barnes & Noble.