On some occasion we have heard that in Yucatan Monday it is almost mandatory to eat stewed beans with pork (Frijol con Puerco), which is a tradition for most Yucatecans, but very few people know the origin of this delicious tradition.

Although there is no exact date, it is believed that the stew was born the slaughtering of pigs on Saturdays and due to the lack of refrigeration at the time, the farmers salted and cured the meat. 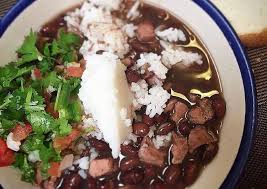 The idea was to keep it from going off, so it was chosen for Mondays, the day when workers returned to their jobs in the countryside and the city, so they could eat a stew consisting of cooked beans and throwing in pork meat.

The legend suggests that this is how the tradition of eating beans with pork on Mondays was born, but the popularization of this dish was also due to the ease in which this stew is prepared, which today is a true delicacy for many.

Back then, they said the dish was prepared by busy women, since many Yucatecas left the beans and meat cooking on the pot, while they dedicated themselves to washing clothes, sewing or cleaning up their homes.

Other versions indicate that the beans with pork could be derived from a meal that the slaves would eat, who were given a bean dish with any leftover part of the animal that their masters had previously descarded.

A torment for some who have eaten this dish all their life, and a total delicacy for others, frijol con puerco is without a doubt one of the most representative and best tasting dishes of the Yucatecan cuisine, when made with all the right ingredients and toppings.

But don’t take it from us, we love this dish so much, our gift to you is a simple recipe to taste it for youself:

1. First, wash the beans and check for any rocks, cook them in a pot with water with onion and the epazote attached. Once it begins to bubble, throw in pieces of meat and a little more water so that the meat finishes cooking. Dont forget salt to season nicely.

2. Constantly check until the meat is soft, at that time remove from the heat, its done.

1. The tomatoes are roasted and slightly charred, mixed with the garlic and the habanero pepper, once soft, the peel is removed and all the ingredients are “sifted”, then chopped cilantro and a little salt are added.

It is served in bowls, with previously chopped toppings and Chiltomate.

The Yucatan Times in collaboration with La Verdad and En-Yucatan