Other beneficiaries were two sons of Gómez Urrutia and a brother of Ricardo Monreal; also, the law firm of the priista Romero Apis and José Armando Ruiz Massieu.

In 2013, during the six-year term of Enrique Peña Nieto, the Tax Administration Service (SAT) forgave 16 million 441 thousand 439 pesos to Yeidckol Polevnsky (Citlali Ibáñez Camacho is her real name) according to the list of tax credits forgiven between 2007 and 2015. 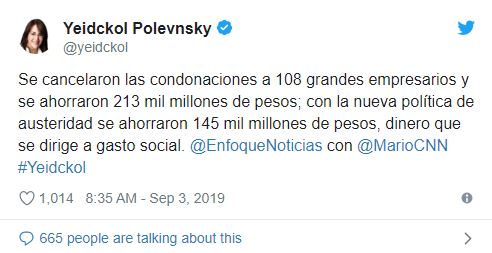 Until today, the list of exempted taxes, with names of taxpayers and amounts, could not be consulted by the public, since the data were protected by tax secrecy. After a two-and-a-half year legal battle waged by Fundar, the Center for Analysis and Research, the names and amounts of the beneficiaries of tax exemptions were published.

The document disclosed by Fundar on Tuesday afternoon, October 1, evidences that the national leader of Morena was one of the benefited taxpayers, as she complied with the requirements established in the 3rd transitory article of the Federal Income Law for the 2013 fiscal year.

Morena’s national president, Yeidckol Polevnsky, attributed an error by her former accountant to her appearance on the SAT list on the cancellation and remission of tax credits.

Polevnsky said this was because her accountant registered her with business activity when she was a senator and had joined the team of Andres Manuel Lopez Obrador. “It was a mistake for the accountant to put me in business,” said Morena’s leader in an interview with Ciro Gómez Leyva for Grupo Fórmula.

She said she “did not not remember” the amount owed to the Tax Administration Service (SAT), after MILENIO newspaper reported on the list of individuals and companies benefiting from exemptions and tax credits, which reached 745 billion pesos between 2007 and 2015.

The relatives of “Morenistas”
Relatives of politicians close to President Andrés Manuel López Obrador also benefited in past six years. According to the document disclosed by Fundar, the brother of Ricardo Monreal Ávila, Rodolfo, received a condonation in 2007, during the six-year term of Felipe Calderón, for one million 896 thousand 751 pesos.

The sons of Morena’s senator and mining leader, Napoleón Gómez Urrutia, Ernesto and Alejandro Gómez Casso, were benefited during Calderon’s administration. Ernesto was forgiven a tax debt of 5 million 490 thousand 478 pesos, while his brother, Alejandro, was forgiven the payment of 5 million 491 thousand 999 pesos, both in 2008.

The office of former PRI Congressman José Elías Romero Apis, Bufete Romero Apis y Asociados S.C., complied with the requirements of Article 74 of the Federal Fiscal Code and the rules of the Fiscal Miscellaneous Resolution, and obtained the remission of 2,596,947 pesos in 2008.

That same year, the PRI also adhered to the provisions of Article 74 of the Federal Fiscal Code and was forgiven 4,625,387 pesos.