TORONTO, Canada (Agencies)- Prime Minister Justin Trudeau won a second term in Canada’s national elections Monday, losing the majority but delivering  strong results despite having been weakened by a series of scandals that damaged his image as a liberal icon.

The liberal leader was re-elected Monday, but lost his majority in Parliament and will be forced to govern with others including a conservative party.

Thank you, Canada, for putting your trust in our team and for having faith in us to move this country in the right direction. Regardless of how you cast your vote, our team will work hard for all Canadians.

The Liberals won  157 of the nation’s 338 electoral seats, versus 121 for the Conservatives led by Andrew Scheer.

“Canadians rejected division and negativity – and voted in favour of a  progressive agenda and strong action on climate change,” Mr Trudeau said at  a victory rally early Tuesday morning in Montreal. “For those who did not  vote for us, we will govern for everyone. We will fight for all Canadians.” 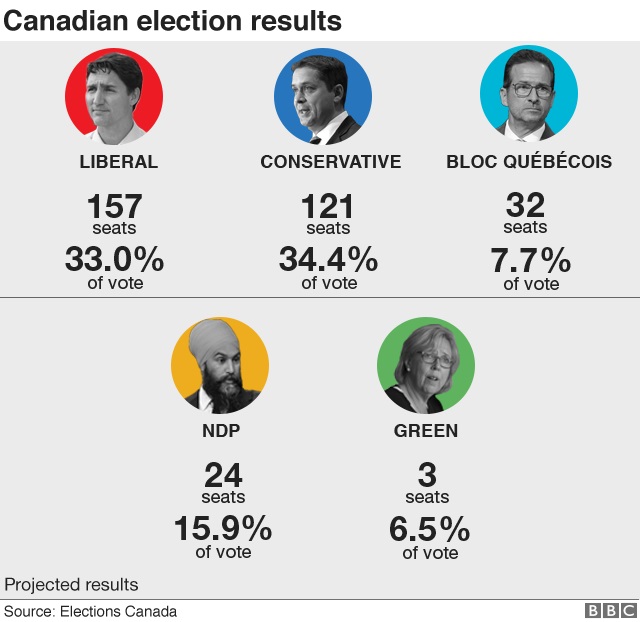 Monday’s result marks a noteworthy erosion of support for the once charismatic prime minister, his narrow victory will be enough to ensure his policies, likely to remain in place, however, without majority, Trudeau will have to reach out to other parties for support on individual pieces of legislation.

So far, the most likely ally for Trudeau will be Singh, who has made a commitment to fight climate change and fund healthcare. This story is just beginning.