He was rejected in Mexico but now triumphs in Japan with a prosthesis that dominates with the mind.

OSAKA Japán  – It was an important afternoon for Mexican scientist Christian Peñaloza, back in 2017 when he closed a deal with the University of Osaka, the second most important in Japan: “They want our project,” he said emotionally.

Christian story is one of those that are sad and at the same time happy. His project was rejected in Mexico multiple times, but today his company, MIRAI INNOVATION, exports to the other side of the world.

Christian earned a doctorate in Japan and has been perfecting AURA, a device that processes signals from the brain, muscles and heart and converts them into concrete actions. “We are collaborating with a researcher at UNAM who is developing a hand prosthesis with our software, so that people, just by thinking, can move the extremity” he explains.

Recently his research was popularized around the world by a video in which a person moves a third robotic arm only with his mind, while with his hands he balances a ball on a tray. “People can handle “three” arms at the same time,” N+1 media reported.

His system can be used in various industries, in medical rehabilitation so that patients can, for example, control a prosthesis or a wheelchair with their minds. Also, with AURA users could play video games without using a control: just with their thoughts.

In Europe this technology costs 15 or 16 thousand dollars (almost 300 thousand pesos), but Christian managed to lower prices for the Mexican market: “We managed to reduce them to 3 thousand 500 dollars (65 thousand pesos). This makes it more accessible for research centers and universities”. Christian explains. 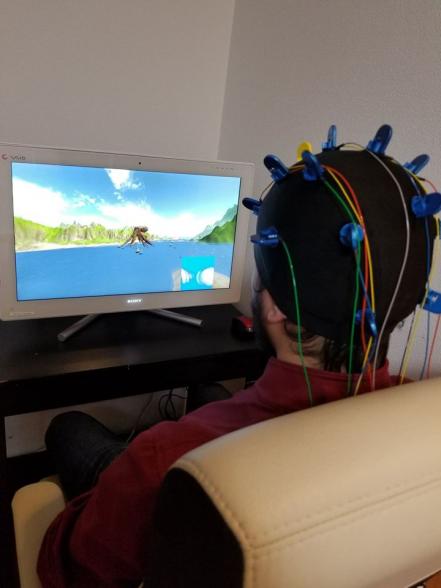 The system that Christian developed looks like a box with several cables: these are the electrodes that are connected to a cap or in the muscles to detect brain signals and muscle impulses. The information is sent to a computer, where you can see the activity of the brain or body.

Similar advances already exist in other countries in the field of neurotechnology: “Facebook is working to get people to write with their thoughts. Nissan announced a car that receives brain signals to prevent accidents. Very important players are betting on this. It’s the future,” Christian says.

However, scientists believe that the same thing does not happen in Mexico and Latin America and attributes the delay to two factors: low investment in science, and the lack of tools for technological development: “Generally these are promoted in technologically positioned countries such as Japan, the United States and Germany, but they take time to reach Mexico, and that causes a delay to us,” he says.

In Mexico under Lopez Obrador´s government, all scholarships to study abroad have been canceled under presidential orders. AMLO claims that people who leave Mexico to study some place else are “tourists”.

Currently under the presidency of Lopez Obrador, most of CONACYT´s support for science and technology is none existent. Other countries such as the United States invests 3% of its Gross Domestic Product (GDP) in research and development. This is equivalent to 20% of the GDP of all Latin American countries as a whole. To be a competitive region it would have to invest a quarter or fifth of its GDP, according to a study by UNAM’s Faculty of Sciences.

Christian studied a master’s degree in Robotics and Artificial Intelligence and a doctorate in Cognitive Neuroscience applied to Robotics in Japan, but getting there was not easy. After the Mexican government refused him a scholarship, thanks to the help of his parents and with his own savings he traveled to Japan, where he worked temporarily in a restaurant to subsidize his expenses.

Although Christian is 14 hours from his country, he does not abandon the idea of having his company in Tijuana and a representative in Mexico City: “It was very complicated. I looked for research funds, but I didn’t get the support I was looking for. I submitted five applications to Conacyt [National Council for Science and Technology] and none passed. A project I sent to the Instituto Nacional del Emprendedor didn’t happen either”.

Even though Congress has approved CONACYT to receive more funds there has been a reduction over last year, according to the General Directorate of Science Dissemination of UNAM.

Although his project was rejected in Mexico, Christian applied to a research fund in Japan: “A research very similar to the one I proposed in Conacyt was accepted here. They gave me 100,000 dollars”. He explains.

With the help of his brothers and one of his best friends, as partners and investors, he created Mirai Innovation. “It means innovation of the future in Japanese,” says Christian. “The objective is to channel the knowledge acquired in Japan, and support me with the Mexican human capital to promote the technologies there,” Christian says. “Thank God I had people who believe in me and gave me their support”.

Helping young people
Christian was named by MIT Technology Review, a publication of one of the world’s leading universities, part of the ten most innovative young people under the age of 35 in Mexico. He received the Innovator of the Year award, a worldwide recognition for young people who provide solutions to global problems.

Ten people work at Mirai Innovation: “We are a small team, we are distributed in Tijuana, Mexico City and Japan,” he says.

Christian hired university talents: “Alan and Rodrigo, 21 years old, are students and entered a few months ago, through a professional internship agreement with CETYS University in Tijuana,” he explains.

Carlos, on the other hand, is 23 and won the Ceneval award as his university’s best score: “I brought him to Japan six months ago and here we developed AURA, along with Bruno, another talented Mexican who is doing his doctorate here”. Lizeth supports the researcher from Mexico City, she was selected by the American Young Leaders Initiative promoted by the U.S. Embassy.

However, some of the agreements he has tried to make have been frustrated by the lack of support. “With the University of Chihuahua we put two projects to CONACYT. They accepted the first stage, but in the second they rejected us. We were going to make a robotic prosthesis for people with disabilities that would be cheaper and easier to use, because it would be controlled with the brain… An agreement had already been made with the research institute where I work in Japan to bring them here, train them and then return to Mexico. These are events that weren’t achieved because we didn’t get support,” Christian laments.

With this new support from Japan, Christian and his team work on a humanoid robot to help older adults with dementia improve their mobility in physical therapies. It’s a pilot project in collaboration with the Ensenada Center for Scientific Research and Higher Education: “This is the way I can contribute, change the paradigm from the brain drain to the circularity of knowledge. It’s love for Mexico. I like to take the country forward,” concludes Christian, who is president of the Japan Chapter of the network of qualified Mexicans abroad RedGlobalMX.