Everything is ready for the Formula 1 “Gran Premio de México” this weekend!

Across the Formula One paddock, Ferrari is seen as the front-row favorite in the Mexican Grand Prix.

The challenge will be turning that into a win while avoiding another drivers’ duel.

Ferrari has been the team to beat since the summer break with three victories. Its cars have started from the pole position the last five races.

The issue isn’t whether Ferrari has finally outmuscled Mercedes on the track, but whether the team can manage the relationship between drivers Sebastian Vettel and Charles Leclerc through the stretch run of the season while keeping an eye on 2020.

But Lewis Hamilton made a strong start to his bid for a sixth world title on Friday when he topped the times for Mercedes in the opening free practice session at the Mexican Grand Prix.

The 34-year-old clocked a best lap time in one minute and 17.327 seconds to outpace nearest rival Charles Leclerc of Ferrari by 1.684 seconds with last year’s winner Max Verstappen third ahead of his Red Bull team-mate Alex Albon.

Hamilton’s only remaining rival for the drivers’ championship, Mercedes team-mate Valtteri Bottas was down in fifth ahead of four-time champion Sebastian Vettel in the second Ferrari.

Carlos Sainz was seventh for McLaren ahead of the two Toro Rossos of Pierre Gasly and Daniil Kvyat with Antonio Giovinazzi 10th for Alfa Romeo. 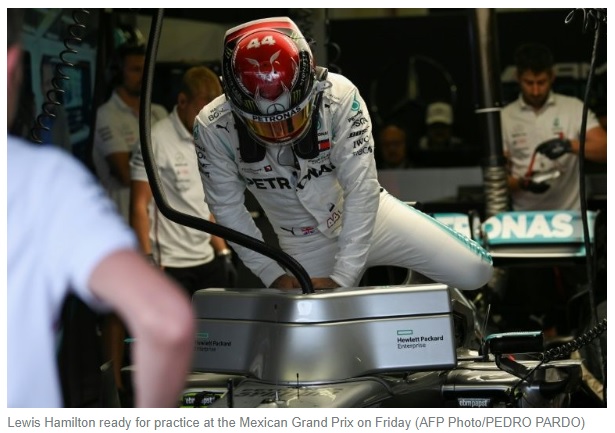 On an overcast day in Mexico City, Lando Norris was the first man to venture out for McLaren ahead of the rest as Hamilton arrived at Mercedes’ garage followed by a crowd of cameramen.

By the time he joined the fray, on track, 25 minutes later, Bottas was on top of the times.

Hamilton soon took over, to be outpaced immediately by Vettel and then again by Bottas, illustrating immediately how competitive this weekend’s contest is likely to be.

By this stage, it was clear that Turn One was causing problems and had caught out Kimi Raikkonen’s Alfa Romeo, Bottas and Vettel, all running off before re-joining via a grass run-off area while Leclerc, one-tenth quicker than Hamilton, took top spot at half-time.

Albon, with a set of soft-compound tyres on his Red Bull, went quickest with 37 minutes remaining shortly before the session was red flagged when Racing Point’s Lance Stroll hit the barriers at the exit of the stadium section.

The left side of his car was damaged, but he was unhurt and able to drive away and return to the pits.

Twelve minutes later, with 20 remaining, the action resumed and prompted a frantic finale as Hamilton, on softs, went top again in 1:17.327 ahead of an improving Leclerc, on mediums.

The Yucatan Times Newsroom with information from ESPN