Down in Mexico, Day of the Dead mixes with Halloween

Midnight on Halloween night marks the beginning of Día de los Muertos, the Day of the Dead, a day of remembrance in Mexico for the dearly departed.

With the growing Hispanic influence in the U.S., Day of the Dead celebrations are becoming popular here as well, though often as another dress-up party.

More than the “Mexican Halloween,” the Day of the Dead is a mixture of ancient Aztec rituals of remembering the dead and the Catholic All Saints Day introduced in Mexico by Spanish conquistadors.

The belief is that the souls of the dead return every year to visit relatives. November 1 is for commemorating dead children, or angelitos (little angels), and November 2 is for all the dead.

In Mexico, families prepare altars adorned with orange Mexican marigolds called flor de cempasúchil, with candles to light the way and water to refresh the spirits after a long journey. They set out the spirits’ favorite foods and pan de muerto, sugary sweet bread, plus skeleton toys for the dead children and tequila for the adults.

Then, families go to the cemetery to decorate graves and party all night with food and mariachi music.

Now, American culture and Halloween are encroaching on the holiday in Mexico.

“At school, teachers try to reinforce our Mexican traditions, but the children now see it as Halloween season,” said Benjamin Mendoza Lezama, a student from Toluca, Mexico, in the ESL Language Center at the University of Cincinnati.

“We have plastic pumpkins because we don’t have pumpkins in Mexico,” Mendoza Lezama said.

Trick-or-treating has also migrated south. Children in Mexico go door to door for handmade skull candies called calaveritas made of sugar or chocolate, or a few pesos. Instead of “trick or treat,” children say, “¿Me da mi calaverita?” meaning “Can you give me my little skull?”

Mendoza Lezama pointed out a Day of the Dead display made by his fellow ESL students from Mexico that had more pumpkins and bats than Mexican elements. “My classmates are a good example of how we have mixed traditions,” he said. 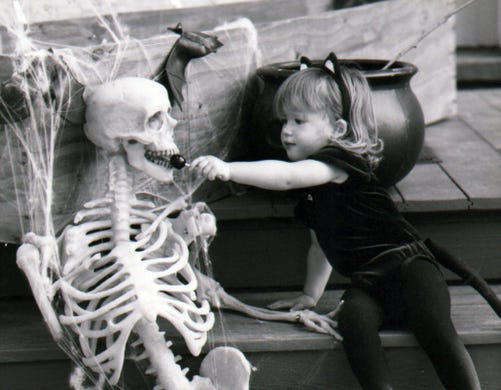