Thousands of Mexicans took to the streets of the capital to dance beside giant skulls and skeletons Sunday as Mexico City rolled out its fourth edition of a Day of the Dead parade inspired by Hollywood, part of an ever-expanding menu of festivities for the holiday.

The city once again borrowed props from the opening scene of the 2015 James Bond film, “Spectre,” in which Daniel Craig’s title character dons a skull mask as he makes his way through a crowd of revelers. Festivities in the capital have expanded in recent years to capitalize on growing interest in the holiday, with temporary art installations in public spaces and colorful weekend events. Yet another elaborate parade is scheduled to traverse the city’s iconic Reforma boulevard on Nov. 2, All Souls Day.

All told, the party in the capital will stretch out over more than two weeks, versus a traditional celebration of just a few days.

Sunday’s show featured enormous, brightly painted puppets in shapes like the Xoloitzcuintli, a hairless dog venerated by pre-Hispanic societies, and dancers decked out like skeletons moving to the brass sounds of marching bands. The carnival-like atmosphere was a celebration of all things Mexican, in contrast to the somber Day of the Dead affairs many Mexican families have long hosted in the privacy of their homes or at cemeteries. 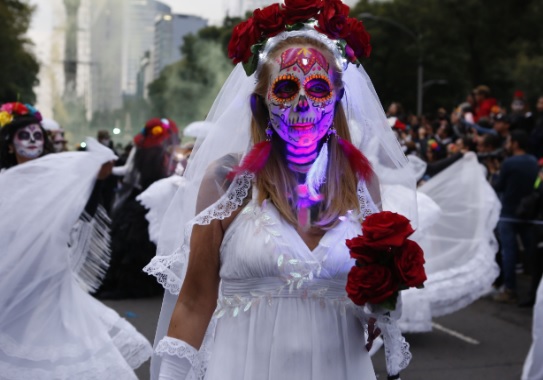 “Festivities make the country happy in Mexico and anywhere else,” said Cindy Saenz, the parade’s coordinator.

For Avelina Bautista, who arrived to the capital a few days earlier from southern Mexico to sell woven handicrafts with her family, the spectacle was completely foreign.

In her town in Oaxaca, where the indigenous population speaks a Mixtec dialect, Day of the Dead is a three-day celebration that begins with children going house-to-house to receive sweet pumpkin treats from neighbors. At night, the townspeople gather in the local cemetery to sit vigil at their loved ones’ graves, strewn with lit candles and orange marigolds. It’s a booze-filled event with live music that lasts until sunrise.