CULIACAN, Mexico (AP) — A dozen or so charred vehicles sit in a government impound lot outside this northwestern city including a patrol car, a military pickup and a tractor-trailer, casualties of a recent terrifying shootout between drug gang henchmen and Mexican security forces.

In a central district where the worst of the violence took place, blown-out windows have been replaced and bullet holes are plastered over on restaurants, convenience stores and a home where the son of Mexico’s notorious drug lord was believed to have been holed up.

Those physical scars of the Oct. 17 gunbattles — what’s come to be known as “black Thursday” by residents of Culiacan, the capital of Sinaloa and a stronghold of the Sinaloa cartel long led by Joaquín “El Chapo” Guzmán — are beginning to heal. But residents are still coming to grips with the worst cartel violence in recent memory, in which 13 people were killed including at least three innocents caught in the crossfire. More than a week later, it’s what’s on everyone’s lips, from cab conversations to newspaper editorials, as the city of some 800,000 wonders how to move on. 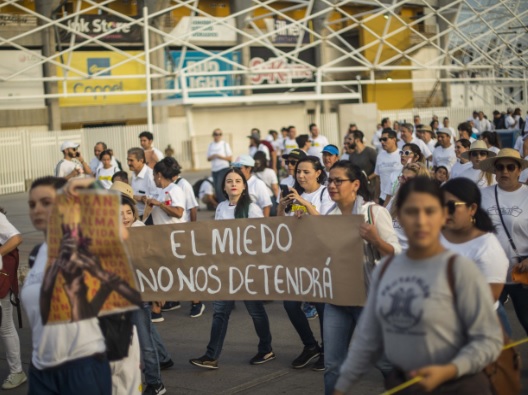 “For people here in Culiacan, there is a psychosis that it could happen again at any moment,” said Marco Castillo, a 52-year-old who works in the transportation industry, speaking on the street-side patio of a restaurant outside of which the gunbattle raged. “On a social level it is going to leave a scar that will be tarnished by what Culiacan has been through.”

Set in an inland valley between the beaches of the Gulf of California and the marijuana plantations of the Sierra Madre Oriental range, Culiacan is home to major exporters of crops such as tomatoes, chilis and eggplant to U.S. markets. A low-slung city with few high-rises, its historic center teems with smoky minibuses and families strolling on weekend shopping trips.

Sinaloa has been “El Chapo” territory for about three decades since the cartel was founded, and it’s seen dark times. In 2011, around a high point of Mexico’s drug war, nearly 2,000 people were murdered. But homicides have been on a downward trend more recently with just 695 this year through September, compared with 1,202 for all last year.