About two-thirds of the birds in the United States will be threatened with extinction if global warming rises by 5.4 degrees Fahrenheit by 2100, according to a report released Thursday from the National Audubon Society, a bird-focused conservation group.

“A lot of people paid attention to last month’s report that North America has lost nearly a third of its birds,” said David Yarnold, CEO and president of Audubon. “This new data pivots forward and imagines an even more frightening future. It’s a bird emergency.”

About 389 out of 604 species are at risk of extinction from climate change. A few of the imperiled species include state birds such as Minnesota’s common loon, New Jersey’s goldfinch and California’s quail. 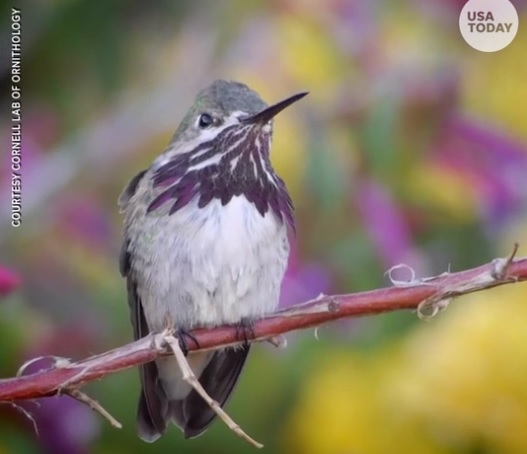 “Birds are important indicator species because if an ecosystem is broken for birds, it is or soon will be for people, too,” said Brooke Bateman, Audubon’s senior climate scientist.

In 2014, Audubon published its first “Birds and Climate Change Report.” The study showed that more than half of the bird species in North America could lose at least half of their current ranges by 2080 because of rising temperatures. Audubon’s new findings reflect an expanded and more precise data set, and indicate the dire situation for birds and the places they need will continue.

On a conference call with reporters Thursday, Yarnold said that “birds localize and personalize climate change.” Each and every North American bird species will experience some level of impact from global warming, he said.

The report offered some hope, noting that if the greenhouse gas emissions that bring about climate change are reduced, then we can boost the odds of survival for many bird species.

“By stabilizing carbon emissions and holding warming to 2.7 degrees above pre-industrial levels, 76% of vulnerable species will be better off, and nearly 150 species would no longer be vulnerable to extinction from climate change,” the report said.

“We already know what we need to do to reduce global warming, and we already have a lot of the tools we need to take those steps,” said Renee Stone, vice president of climate at Audubon.

“Now, what we need are more people committed to making sure those solutions are put into practice,” she said.

“Our elected officials at every level of government must hear from their constituents that this is a priority,” she said. “Audubon is committed to protecting the places birds need now and in the future and taking action to address the root causes of climate change.”

This work is the most comprehensive model-based assessment of climate change vulnerability of birds in North America to date, according to Audubon.

“Our findings in this report are the fifth alarm in a five-alarm fire,” said David O’Neill, Audubon’s chief conservation officer, in the study.

For more information, check out Audubon’s ZIP code-based tool, the Birds and Climate Visualizer, which helps users understand the impacts to birds where they live.