With the theme of the Day of the Dead, this year’s edition of the traditional Camino de Flores, which is being installed in Mèrida’s Parque de la Paz, will be inaugurated and open to the public on Friday, October 25.

José Collado, director of the Municipal Public Services, informed that their staff has already started with the installation works and that this year there will be innovations such as a special decoration related to the festivity of Hanal Pixán (Day of the Dead), and it is expected that thousands of people visit the “floral sculptures” featuring Catrinas, as well as a Maya goddess. Besides, this year there will be an area exclusively for pets.

The official said that the main attraction will be an immense colorful flower garden with incredible shapes and patterns, that more than 100,000 flowers will be used in this year’s edition of Camino de Flores, and the traditional flor de cempasúchil, which is brought from Central Mexico, will be the most representative element this year. 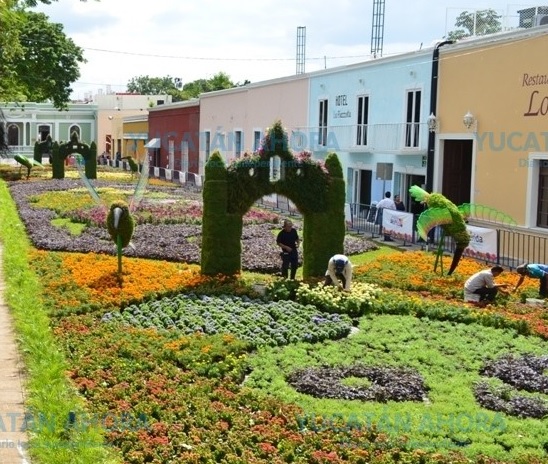 Camino de Flores is part of the Festival of Souls, and as in each edition, a videomaping is screened on weekends, featuring the local flora and fauna, as well as part of the history of Mérida and the Yucatán.

José Collado mentioned that Camino de Flores is expected to last between 2 to 3 weeks, before the flowers dry up (depending on the weather), and will be open to the public from 9 in the morning to 9 in the evening.

“Camino de Flores is a temporary tourist attraction full of color, which aims to create awareness on environmental care and the preservation of the local flora and fauna”. he concluded