ESSEX(agencies)-A murder investigation has been launched after 39 bodies were found inside a Bulgarian-registered lorry on an industrial estate in Essex.

A 25-year-old driver from Northern Ireland was arrested on suspicion of murder.

Local police and community sources told the Guardian that the arrested man was believed to be Mo Robinson, from Portadown, County Armagh. Essex police declined to comment. 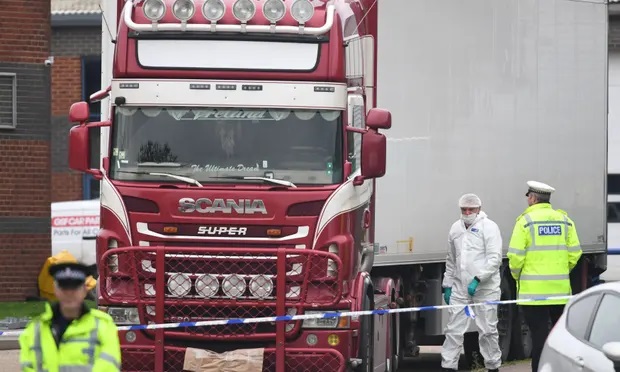 The NCA said: “We are aware of this tragic incident which is now the subject of a murder investigation being led by Essex police and we have deployed NCA officers to assist.

“We are working with partners including Essex police and immigration enforcement to provide specialist support to urgently identify and take action against any organised crime groups who might have played a role in causing these deaths.”

Police officers were called by the ambulance service shortly before 1.40am on Wednesday after the discovery of a container with people inside at the industrial park in Eastern Avenue.The white lorry in which the bodies were found could be seen with its rear lights on, close to a warehouse operated by Southern Drains Services.