The Honorato family found the remains of a mastodon in the town of San José Buenavista, municipality of General Felipe Ángeles, Puebla, while Mr. Basilio was teaching his son how to make a lime kiln, local authorities reported.

The find was recorded on September 17; after digging, relatives ran into what looked like the root of a tree. However, by removing the soil layer they discovered the fossil of the mammal that inhabited the earth 10,000 years ago.

On Sept. 20, the National Institute of Anthropology and History (INAH) was notified of the discovery, and experts from that institute arrived to the site to confirm that it was the fossil of a mastodon. Basilio Honorato Cisneros commented in an interview:

“We dug out and made a circle about twenty meters in diameter; we found the mastodon. The INAH came and corroborated that it is a fossil. We are proud because something like this, not everyone has the opportunity to find or see”(SIC). 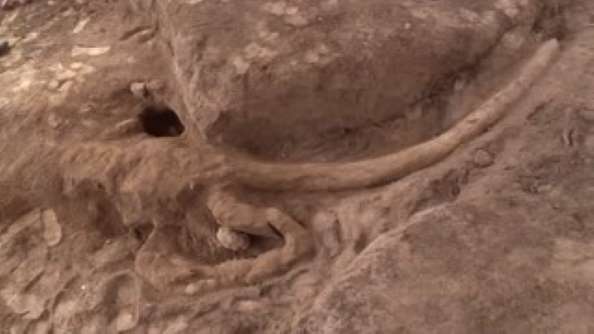 So far, they are visible:

It is not ruled out that there could be two specimens, due to the position in which the found parts are locted. The family asked for the support of public security authorities, since for more than 20 days they have guarded the pieces without official support and they fear that they could be stolen.

Griselda Cortés Pliego, a local primary school teacher, commented that the discovery is a treasure for the community since” children will have visual contact with the ancient animal and will gain knowledge and will make learning more enriching for the children. (SIC)

Inhabitants of San José Buenavista hope that once the work of the INAH´s archaeologists is finished, the fossils can be extracted so that they can be placed and protected in a community museum that will serve as part of their cultural heritage for future generations.