Federal Police agents in Yucatan reported the seizure of two spider monkeys, animals considered as endangered species, which were detected in the parcel area of ​​the “Manuel Crescencio Rejón” International Airport of Mérida.

According to the federal corporation, the documentation intended to transfer the monkeys was false, so that´s how the federal agents were able to detect the animals, that were placed under the custody of the corresponding authorities.

The Federal Police informed that the seizure was carried out during an inspection in the hangar of the air terminal’s parcel area, where two wooden boxes with holes on the sides were detected.

This situation caught the attention of the officers, who immediately went to verify the boxes content, and that’s when they realized that there were two living young spider monkeys inside, with false documentation for their transfer. 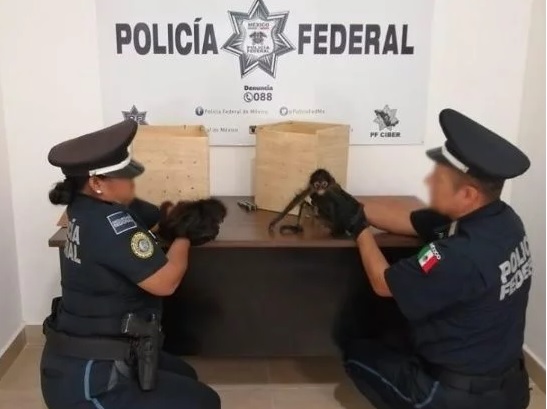 One of the monkeys was going to be transferred to Monterrey Nuevo León, and the other one to the city of León, Guanajuato.

The specimens are now in custody of the Federal Attorney for Environmental Protection (Profepa), the authority in charge of safeguarding the animals.