Worldwide, women have been underrepresented in their own countries’ governments, business sectors, sports federations and societies in general… but that is now slowly changing.

That is why The Yucatan Times has elected the following Top 5 Women for 2019:

Yucatecan Marisol Ceh Moo wins the Latin American Indigenous Literature Award. The award will be given to her in a ceremony on December this year, during the Guadalajara Book Fair.

Obtaining a prize  of 300 thousand pesos, the winner of the seventh edition of the Latin American Indigenous Literature Award (PLÍA) 2019 is the famous Yucatecan Maya language writer Marisol Ceh Moo.

Born in Calotmul, Yucatán, Ceh Moo is the first woman to win this award since its creation in 2013.

Through a telephone call to her home in Yucatan, the winner learned about her recognition and expressed all her excitement and pride in representing the Maya community in this international competition.

Sol Ceh is known for texts such as X-Teya Puuksiikal Koolel (A Woman’s Heart) her first novel written in Maya language. The work was published in 2009 by the General Directorate of Popular Cultures in an edition in Maya and Spanish. The book tells the story of the murder of a young communist militant in Yucatan, in the 1970s.

Daniels Fund President and CEO Linda Childears will be recognized as the 2019 Lifetime Achievement Award winner. Her decades of success in the financial and philanthropic sectors, including current board positions with the Denver Metro Chamber of Commerce and Council on Foundations, have established Childears as an indispensable community leader and revered mentor.

2019 Youth Award: Grace Callwood, founder of The We Cancerve Movement, a nonprofit organization she started the same year she was diagnosed with stage 4 non-Hodgkin’s lymphoma at the age of seven to create giving opportunities that bring happiness and hope to sick, homeless and foster children in Maryland, USA.

Some people are born into this world to serve others. Grace Callwood is undoubtedly one of them.

When she was two years old, Grace asked her family to donate a red wagon to the pediatric unit at the University of Maryland Upper Chesapeake Medical Center after a brief hospitalization. For her third birthday party, she asked guests to bring toys and games in lieu of presents so she could donate them to children in the hospital. At the age of four, she and her family traveled to Louisiana to donate food items to a relief organization for Hurricane Katrina. That same year, she asked guests to bring non-perishable food items to her birthday party after learning the Maryland Food Bank was low on supplies.

Grace’s life was turned upside down when she was diagnosed with stage 4 non-Hodgkin’s lymphoma at the age of seven. But her spirit and desire to serve other children couldn’t be broken. In the midst of early cancer treatments, she heard about a local family with two little girls who had lost their home in a fire and were left with nothing. Grace decided to give them all of her new back-to-school clothes. After all, being diagnosed with cancer meant she wasn’t able to attend school, and she didn’t want her clothes to be wasted.

One of the leading members of the USWNT for the past decade, Megan Rapinoe brings skill and vision to the team from the left wing.

She has been a consistent goalscorer and assist-provider throughout her glittering career. A Women’s World Cup champion, gold medallist and The Best FIFA Women’s Player 2018 finalist, Rapinoe scored three goals and provided three assists at the Concacaf Women’s Championship to guide USA to World Cup qualification.

And this year she was the US Women’s National Soccer Team key player that helped them win the 2019 FIFA World Cup in France.

“I’m very hopeful, always,” Rapinoe said of the lawsuit, which is likely headed for a jury trial after the team broke off mediation talks with the federation last month. “Not always encouraged, but I remain hopeful. Eventually, [equal pay] will happen … it may not be in my playing career, but I’ll spend my dying breath doing this, always”, she declared. 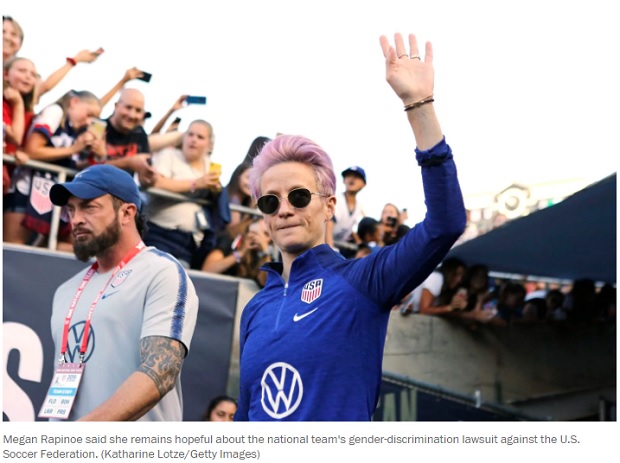 Slovakia’s first female president, Zuzana Čaputová, a lawyer and environmental activist, was sworn this year as the first ever woman president of Slovakia, vowing to fight impunity and restore justice in a country largely affected by large-scale political corruption.

“I offer my expertise, emotion and activism. I offer my mind, my heart and my hands,” she said at her swearing-in ceremony.

“I want to be the voice of those who are not heard.”

Čaputová, a lawyer and political newcomer, is now the youngest person to serve as president of Slovakia. She is sometimes called the “Erin Brokovich of Slovakia” for her decade-long struggle to close a toxic landfill in her hometown, which she succeeded in doing, earning her the 2016 Goldman Environmental Prize.

“Under the constitution, people are free and equal in dignity and in rights, meaning nobody is that irrelevant to have their rights compromised, nor is anyone that powerful to stand above the law,” she said in her inauguration speech.

Her presidency could represent a turning a point for Slovakia, which was ranked 83 out of 149 countries in the Global Gender Gap Report 2018, scoring especially poorly for women’s participation in politics.