On the Mexican Pacific coast, Tropical Storm Juliette is expected to become a hurricane

By Yucatan Times on September 3, 2019
Tropical Storm Juliette is strengthening in the Eastern North Pacific Ocean and is forecast to become a hurricane according to the National Oceanic and Atmospheric Administration (NOAA), Juliette is whipping out maximum sustained winds of 60mph. To become a Category 1 hurricane on the Saffir Simpson hurricane wind scale, Juliette will need winds of minimum 74mph. Tropical Storm Juliette is located about 485 miles west-southwest of Manzanillo Mexico and 520 miles south of the southern tip of Baja California. As of 3am UTC (4am BST) the centre of the powerful storm was located near latitude 15.4 North, longitude 110.6 West.Juliette is moving toward the west-northwest near 13mph with a minimum central pressure of 998MB (29.94 inches). A west-northwestward motion with some decrease in forward speed is forecast through Wednesday September 5th, NOAA reports. 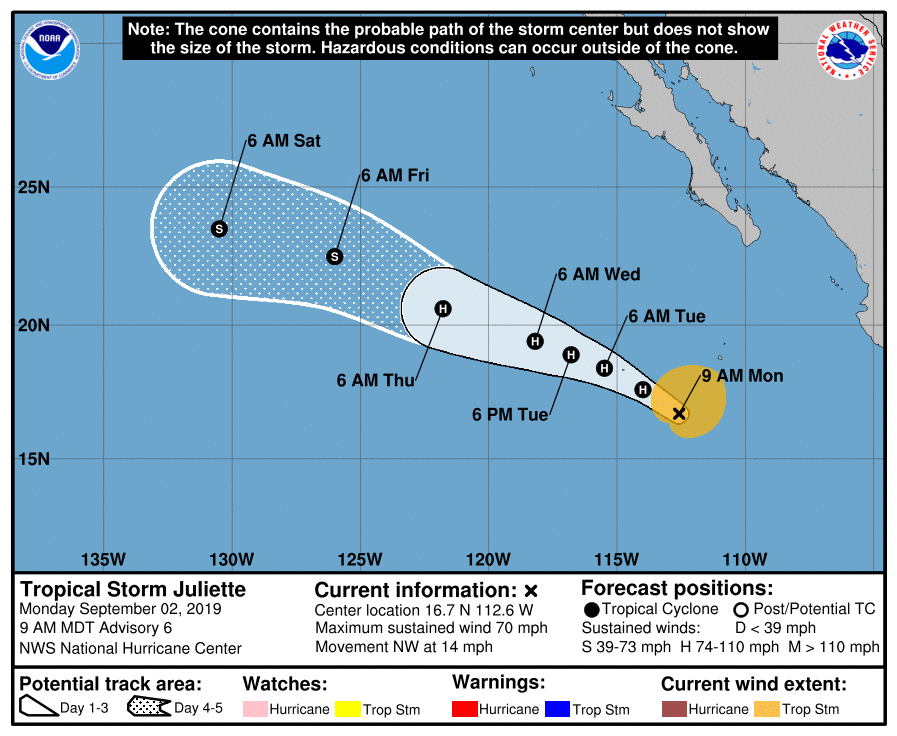 Tropical-storm-force winds extend outward up to 150 miles from the centre. NOAA said in its latest advisory: “Juliette is expected to intensify at a near climatological rate during the next 48 hours, indicative of low deep-layer shear, a moist mid-level atmosphere, and warm oceanic sea surface temperatures. “After 72 hours, Juliette will be moving over decreasing SSTs, and into a high statically stable marine layer air mass which should induce gradual weakening. “The NHC forecast follows suit and is based on a blend of the NOAA HFIP HCCA and the IVCN multi-model intensity guidance.” Source: The Baja Post