Baby Boomers may be able to retire sooner than they think—according to the authors of Live Richer, Spend Less: International Living’s Ultimate Guide to Retiring Overseas, a new book by Suzan Haskins and Dan Prescher. The just-released volume explores in-depth the possibility of retiring abroad to any number of good-value locales where a low cost of living can allow people to retire years earlier than they imagined.

“Some are forced into early retirement, through downsizing and layoffs. During the most recent economic downturn, that happened to several of our friends. They quickly discovered that when you’re ‘of a certain age,’ it’s hard to find a job. And if you do, you likely won’t get a salary that equates to your lifetime of experience. Whatever the scenario, the good news is that there are excellent options for good living overseas.” 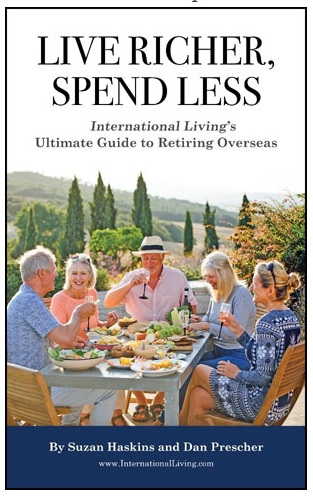 Statistics show that the average American hasn’t saved nearly enough for a comfortable retirement Stateside, and conventional wisdom says: Work longer, save more, and lower your expectations for retirement.

But in the right places abroad, according to the authors, folks approaching retirement don’t have to do any of that. By cutting their cost of living by half, or more—they can retire years earlier than expected (and live better than they would have at home).

“Over the years, we have noticed more younger expats refusing to postpone retirement,” says Dan. “They’re opting, instead, to retire early overseas in places where the cost of living is a small fraction of what it is in the States or Canada.”

Offering real-life scenarios and calculations, the book looks at: