PLAYA DEL CARMEN, SOLIDARITY, September 13.- Compared to other years, the current “low season” is hitting the tourism industry hard in Playa. They report operations of only 30 percent, which according to some of these service providers, is a consequence of the massive arrival of sargassum and insecurity.

According to a survey conducted in the Riviera Maya, restaurant waiters agree that they already expected a critical offseason because summer was not that good in the first place, when they did not exceed 60 percent between July and August, whn normally their operations were above 80 percentage points.

In that sense, Javier Velázquez of the Pez Vela restaurant commented that the low season seems more critical than expected because the activity in general average is between 25 and 30 percent or what is equal to three tables out of 10 in all restaurants and bars (either it’s breakfast, snack, lunch or dinner), and now the weather is not helping them either.

Tourism service providers were hopeful that this long weekend could bring a good number of travelers from Mexico City, Guadalajara and Monterrey, who usually take advantage of the flight promotions, specials and discounts in this destination during the Mexican Independence Day holidays.

Many Playa del Carmen restaurants offered specials and “special packages” in order to try to encourage local consumption, however, the number of visitors was scarce or minimal. 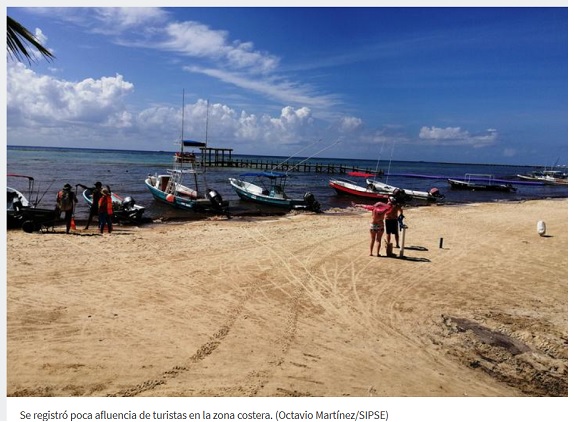 Tourism service providers across the state, reported a low demand for the different attractions they offer, during the Mexican Independence Day long weekend.

According to the latest occupancy report in the Riviera Maya, issued by the Tourism Promotion Council of Quintana Roo, the destination was on Friday, September 13, in 56.8% of hotel occupancy in the more than 47 thousand rooms that exist, that is very distant from the figures regstered one year ago on “Día del Grito“, when they were above 85% .