In his first annual government report, AMLO says he is delivering change as promised

On Sunday September 1st, during his first annual state of the nation address, Mexican President Andres Manuel Lopez Obrador brushed off and minimized the country’s problems including a stagnant economy and spiralling violence, to insist that he is delivering the “transformation” he promised.

Elected last year in a swell of anti-establishment fervor, the left-wing populist has radically changed the style of the presidency, ditching the presidential mansion, guards and jet; making extremely inconsistent budget cuts with the sole purpose of making his government appear austere in the eyes of the people (as populist measures).

But the truth is that he has struggled to deliver on key promises, starting with economic growth and to put an end to rampant violence fueled mostly by drug trafficking.

In his first annual “Government Report,” Lopez Obrador briefly acknowledged that “the economy is growing little by little,” and that “we still suffer from insecurity and violence.” 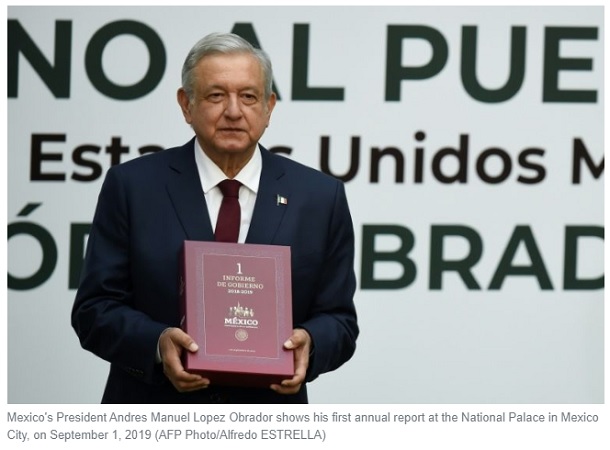 However, “AMLO,” who remains widely popular nine months into his term, devoted much of his address to rehashing his campaign stump speech (as if he were still in the presidential campaign), heavy on anti-corruption, austerity-crusading rhetoric and finger-pointing at the leaders of the past, blaming them for the current situation in the country, and not accepting his administration’s responsibility.

“The essence of our approach is to turn honesty and austerity into a way of life and a form of government,” he said at the National Palace, where he lives and works.

“Nothing has harmed Mexico worse than the dishonesty of its leaders. That is the main cause of social and economic inequality, of the violence from which we suffer,” AMLO added.

“If you ask me to express in one sentence what the strategy of my government is, I would say: To end corruption and impunity,”

In a sign of the polarizing nature of his presidency, some 2,500 protesters marched down Mexico City’s main avenue, Paseo de la Reforma, chanting “Get out, Lopez Obrador!”

One of the organizers of the march, opposition politician Fernando Belauzaran, accused the president of lying to Mexicans in his daily 7:00 am press conferences, which have come to dominate the national news agenda (in another 100% populist tactic, just as Hugo Chavez, former president of Venezuela used to do with daily his TV program “Aló Presidente” ).

“He doesn’t tell the truth. It’s like a festival of mythomaniac tendencies every morning,” Belauzaran told journalists.

“Andres Manuel has deceived a lot of people who believed in him. They still haven’t realized the magnitude of the mistake they made voting for him,” protester Maria Jose Tam, a 34-year-old marketing specialist, told AFP.

“We have no opponents, the opposition is morally defeated”.

The truth is that the opposition remains badly fragmented from the July 2018 elections, which Lopez Obrador and his upstart party, Morena, won in a landslide.

Most Mexicans like his folksy style — a break with the elite ruling class of the past — and most appear willing to wait for him to deliver concrete results. The question is how long.

Latin America’s second-largest economy shrank by 0.2 percent in the first quarter of 2019, and registered zero growth in the second — far from Lopez Obrador’s pledge to deliver two-percent growth this year and an average of four percent across his six-year term.

As usual, AMLO doesn’t accept his reponsibility in the number of people murdered — a closely watched indicator of the violence from the country’s “drug war” — which appears to be on track to set a new record this year, with 20,135 homicides so far.

Lopez Obrador ticked off numerous points he sees as victories:

Probably the most important of them was reducing theft from state oil company Pemex’s pipelines by 94 percent. The booming black-market industry had been costing the country an estimated $3 billion a year.

He also claimed a win for negotiating his way out of the crushing tariffs that US President Donald Trump had threatened to impose on Mexico if the government did not do more to stop undocumented migrants from crossing its territory to the United States.

Lopez Obrador said Mexico had dodged a “possible political and economic crisis” with the June deal, under which his government has deployed some 21,000 National Guardsmen to tighten its borders. 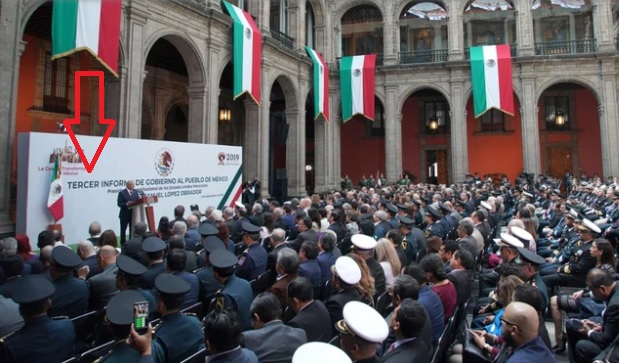 In a sign of his headstrong determination to do things his own way, Lopez Obrador spoke in front of a banner heralding his “Third Government Report,” apparently counting two earlier speeches as numbers one and two.

Under the Mexican constitution, which establishes that the president must deliver one such address per year, it was in fact the first.

In his usual colloquial speech, López Obrador concluded: “Fortunately, while those who oppose the change are stunned and bewildered, most Mexicans support the transformation, and they are happy, happy, happy, happy.”