Following up on the article published earlier today, The Yucatan Times reports that approximately half of the pre-Hispanic collection, consisting of 120 pieces, of the Millon auction was sold on Wednesday Sep. 19th in Paris, France at 3:30 p.m.

The star piece of the sale reached the price of 290 thousand euros (commission not included), the maximum value obtained in the entire auction. It is a figure of the water goddess Chalchiuhtlicue sitting on her legs. According to the description of the Millon house catalog, the deity that carries a huipil with three triangular panels has a sentimental face that transmits intensity.

The output value of the carved volcanic stone statue, with the number 210008 of export certification as a cultural asset, ranged from 40 to 60 thousand euros. 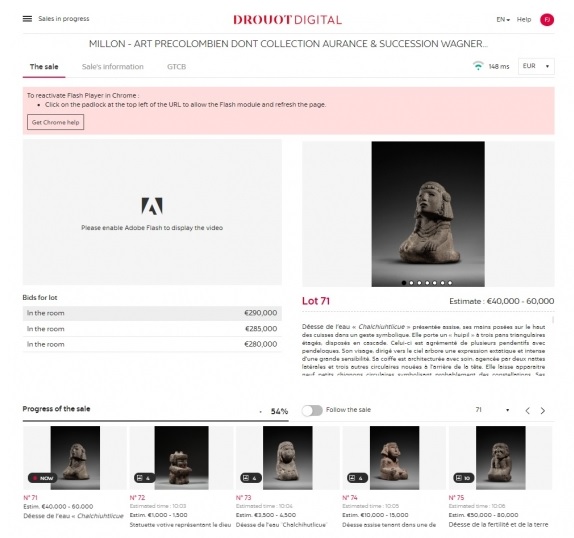 Despite Mexico’s requests for the “Art pre-Columbian dont collection Aurance e Succession Wagner” auction not to be held, Millon made the sale of the collection that included 95 pieces belonging to the Teotihuacan, Maya, Olmec cultures, as well as to the states of Guerrero and Oaxaca.

The transaction took place despite the fact that the National Institute of Anthropology and History (INAH) filed a complaint with the Attorney General’s Office of the Republic, with the support of UNESCO to Mexico, as it also warned that 23 of these pieces are not authentic.

According to the EFE agency, the objects of the auction were owned by the marriage of collectors Manichak and Jean Aurance, which consisted of masks and figures whose estimated price in some cases rose to 80 thousand euros (88 thousand US dollars). According to the Instagram account @arts_premier, alternates with the official Millon, the couple acquired the pieces around the 60s through expert galleries in the area.

The auction “Art pre-Columbian dont collection Aurance and Succession Wagner” lasted about two and a half hours. In the first minutes 39 lots were skipped, without knowing with certainty the reason for this situation, but as the sale progressed several pieces did not get offers quickly and gave rise to the next lot.

The offers increased after the second transaction, that of lot 41, a statue of a monkey with aggressive expression originating in Veracruz and belonging to the years 900 and 1200 A.D. The sculpture was sold at 8,800 euros, when its output value was estimated at 4 thousand euros.

In this auction, lot 54 stood out, a low relief of the Maya culture that managed to position itself as one of the highest sales of the auction with an offer of 50 thousand euros, when it was expected to obtain only 30 thousand. 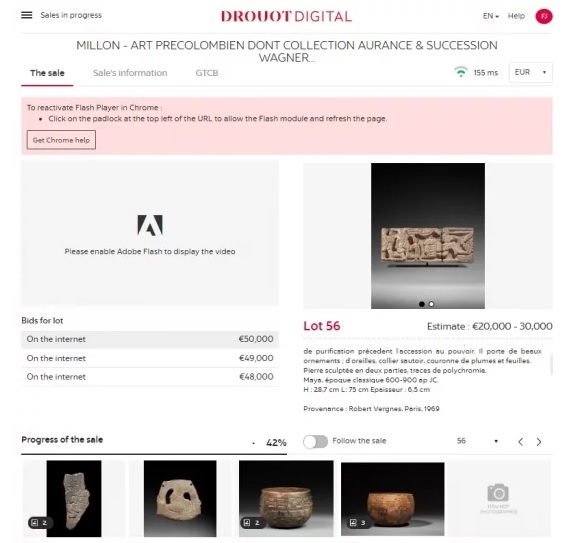 While gold jewelry from Colombia did not reach even the initial value; as well as the low supply by customers for lot # 107: a “magnificent anthropomorphic sculpture” from Campeche with an initial value of 60 thousand euros. Buyers only offered between 40 and 45 thousand euros, so the piece was not sold.

Before the auction took place, the Mexican ambassador to France, Juan Manuel Gómez Robledo, lamented that despite all the diplomatic efforts that were carried out, the Millon auction house decided not to suspend the sale of pre-Columbian pieces that belong to the Mexican cultural heritage.