CHICHÉN ITZÁ Yucatán – (Efe) – The intense sun rays heat up the archaeological zone of Chichén Itzá, in the southeastern Mexican state of Yucatán, where three Mexican restorers are about to finish one of the most ambitious projects of the National Institute of Anthropology and History (INAH).

“The light of Kin”, the sun god of the Maya, has approved the participation of archaeologists from Spain, France and Germany and gives a different light tone to the three buildings under restoration, “El Juego de Pelota” (The Maya ball game), “El Templo de los Guerreros” (The Warriors temple) and “La Iglesia”, (The Church).

“It is the first comprehensive restoration project to be carried out on these buildings using intervention techniques,” Eduardo López Calzada, delegate of the INAH Yucatán Center, told Efe.

The Integral Restoration Project Chichén Itzá 2019, which began last July 1, is being carried out with part of the 17 million pesos (847,669 dollars) granted to INAH by the “Patronato de las Unidades Turísticas de Yucatán”.

“With these resources we are intervening in depth buildings of Chichen Itza, Uxmal, Izamal, Kulubá and Dzibilchaltún; some of these sites will have new signs and will recover their majestic beauty”. Explains López Calzada.

Claudia Ocampo Flores, is the restorer of the “Ball game” her satisfaction is enormous and she says: “Since 1930 no deep works were made in the enormous Mayan ceremonial center that measures 150 by 40 meters and has six reliefs in the sidewalks”.

Pride blossoms in the young restaurateur’s face as tourists from Germany, Spain, the United States, Belgium, France, Russia, Canada, Singapore and other countries are amazed at the central scene depicting Ah Puch, the Mayan god of death.

On one side is a warrior-player who holds in his hand the head of the losing opponent who is on his knees. “We don’t know if they are Mayans against Toltecs because the decoration of the players is very similar.” Seven snakes sprout from the neck of the decapitated man, giving life to a tree with their blood. “This tells us that the Mayas saw sacrifice as the giver of life,” she explains.

In the bowels of Chichén Itzá, where the sun’s rays do not reach, treasures are also kept for humanity, which may be reopened in the next few years to the thousands of visitors who annually come to see one of the “New Seven Wonders of the World”.

“In the substructure of the Temple of the Warriors we focus on the integral intervention of the pictorial elements in the pilasters that, unlike what is outside the archaeological zone, still preserve their polychromy, the art of painting or decorating with various colors,” explains restorer Claudia García Solís. 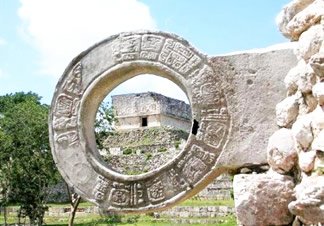 The relevance of the work carried out by the INAH Yucatan Center lies in the fact that “everything is original”. The site shows the technique used by the Mayas in soft and homogeneous quarry stones, which allowed them to work, lime based paint with natural pigments, such as iron oxide.

The pilasters, also illuminated with the typical Mayan blue, “have relevance in the universal sense because Chichen Itza is a world heritage of humanity that shows the splendor of architecture and manifestations of ancient civilization,” says Garcia.

For the specialist, the mark left by Mayan painters, sculptors and architects in Chichén Itzá -which according to archaeologist Juan Octavio Juárez Rodríguez receives more than 2.7 million visitors a year- is one of humanity’s greatest achievements.

Chichen Itza is living a historic moment “thanks to the cleverness of men and women who left their universal values embodied in the glyphs and characters engraved on stone that could be warriors or gods,” she says.

In the jungle surrounding the 1,547-hectare (3,823 acres) site of Yucatan’s most visited archeological site, the sun that seeps through the trees, gives deities of the past grieve as they witness how more than 1,200 street vendors who have invaded their sacred grounds, deceive tourists and sell objects made in China.

The tour of the central area of Chichén Itzá allows the visitor to enjoy “The Red House” and “The Observatory” whose magnificence grows with the sunlight, even against the eclipse that is the presence of the street vendors, with alpaca rings, warriors, Mayan calendars, blankets, t-shirts, and any unimaginable article that has nothing to do with this ancient civilization, most of all with the famous “Made in China” label.

At every step of the four kilometers separating the “Temple of the Warriors” from the “Church” the restorer Karla Martínez López does not hide her admiration for the architectural beauty of the place, especially the building she rescues with the support of Mexican and foreign archeologists.

“La Iglesia (The Church) is one of the most beautiful mosaic-style buildings of the Early Classic (900 A.D.),” she says.

She assures that no work had ever been done on the building that shows faces of Chaac, the god of rain, and that despite the weather “it never collapsed”. Many people don’t know about the building, “perhaps because it’s in the furthest part of the archaeological zone, but it’s a beautiful place where the Mayas performed their ceremonies,” she explains.

Chichen Itza the place of the “water magicians” with its majestic architectural designs and remarkable Cosmo-vision awaits for those who want live a mystical Mayan experience.