At the Drouot Millon auction house in Paris, France, on Wednesday Sept. 18, 95 pre-Hispanic pieces of Mexican origin will be sold. The auction will start at 70 thousand euros, and the collection includes pieces such as the ornament of a shaman, approximatelly 2 thousand years old.

This auction is taking place, despite the fact that Mexico’s National Institute of Anthropology and History (INAH) and the Ministry of Foreign Affairs (SRE) have made efforts before the French authorities so that this set of works, including stone statuettes, jade plates and polychrome ceramics from the Teotihuacan, Maya and Olmec cultures, are not sold.

This was reported to the media by the ambassador of Mexico in France, Juan Manuel Gómez Robledo, who said that the commercialization of archaeological pieces “generates favorable conditions for the resurgence of looting by organized crime groups through illegal excavations”, so that Mexico demands the suspension of the bid and the repatriation of all the archaeological pieces acquired by a couple of French collectors named Aurance.

It was reported that INAH filed a complaint with the Attorney General’s Office (FGR) and sent the information to French justice (Sécurité Civile), accompanied by a request for judicial cooperation in criminal matters. And, according to the diplomat, the United Nations Educational, Scientific and Cultural Organization (Unesco) was also alerted of this situation.

The Millon house has not responded to the request of the Mexican government, and will offer a total of 120 works, 95 of them from the cultural heritage of Mexico. 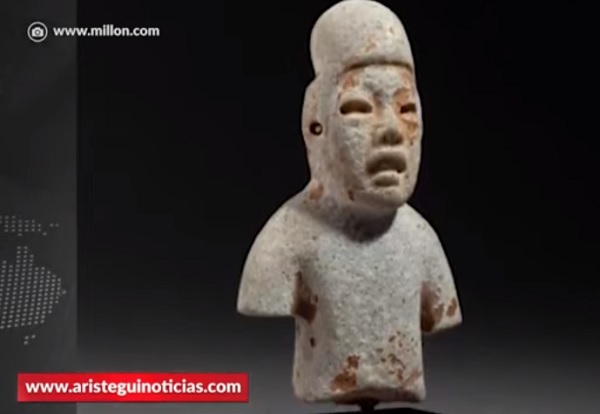 In 2013, also in Paris, the Barbier-Mueller collection was auctioned, without the Mexican government being able to prevent it, as one of the requirements is to prove that the pieces come from looting, a difficult procedure that was achieved in 2008, with a bas-relief Olmec stolen from the Lacandon Jungle in Chiapas and that “was documented in 1968 by archaeologists before reappearing in Paris.” The piece was finally returned to Mexico, Radio France International reported.

Similarly, it was mentioned that last week the Guatemalan government got Millon to suspend the sale of a pre-Hispanic piece.

Through his Twitter account, Foreign Minister Marcelo Ebrard stressed that for Mexico it is “very relevant” to oppose “by all legal means” to the sale of historical heritage abroad.

According to Gómez Robledo, for the government of Andrés Manuel López Obrador the defense of cultural heritage is one of the priorities in foreign policy.