Can Trump really be impeached and what it would take for Congress to do it?

“Impeachment means that the U.S. Congress thinks the president is no longer fit to serve and should be removed from office. Here’s what the Constitution says: “The President, Vice President and all civil Officers of the United States, shall be removed from Office on Impeachment for, and Conviction of, Treason, Bribery, or other high Crimes and Misdemeanors.”

It is the U.S. Congress, specifically, the House of Representatives, who can impeach the president, under the framework of the Constitution, the House can vote to impeach a president for “high crimes and misdemeanors.” It’s up to the House to decide what that means.

But impeaching the president is not the same thing as removing the president from office. For that, the Senate holds a trial presided over by the chief justice of the United States. Two presidents in American history have been impeached (Andrew Johnson and Bill Clinton). One resigned under threat of impeachment (Richard Nixon). None have been actually removed from office.

What’s the Trump-Ukraine story about and why Pelosi made her move?

The White House has released details of a phone call between President Trump and his Ukrainian counterpart that has triggered a US impeachment inquiry.

Mr Trump denies withholding US military aid to Ukraine as leverage in a bid to smear his political rival, Mr Biden.

The Trump-Ukraine phone call is part of a whistleblower’s complaint.

Reacting to the controversy on Wednesday morning at the United Nations General Assembly in New York City, Mr Trump said it was the “single greatest witch hunt in American history”.

The Democratic leader of the House of Representatives, Speaker Nancy Pelosi, on Tuesday threw her weight behind an official impeachment inquiry into the president’s actions.

Mr Trump promised that a “complete, fully declassified and unredacted transcript” of the 25 July call would be released.

But the details disclosed by the White House on Wednesday morning were notes of the conversation taken by US officials who listened in. 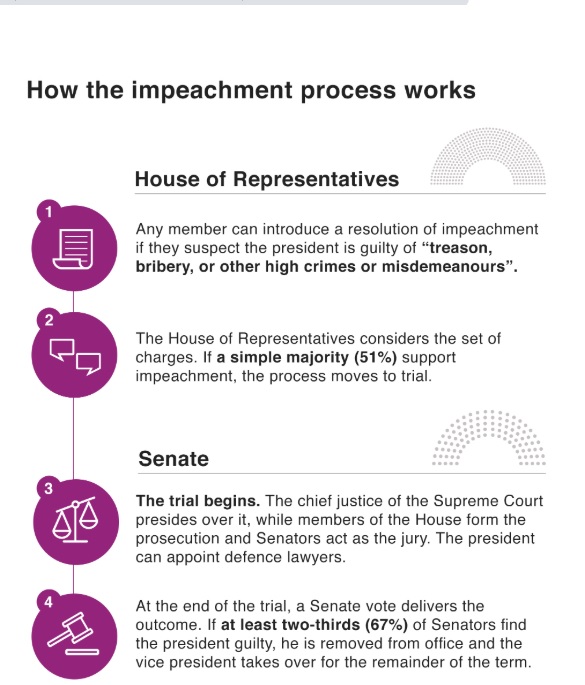 One question that could emerge in the coming weeks is whether the House Judiciary Committee handles the impeachment process, as is typical, or whether the Democratic majority would appoint a hand-picked “select” committee to do it. The Judiciary panel includes both Democrats and Republicans, but as the majority party, the Democrats currently control it.