Yucatan, with more sommeliers per capita – Mexican Association of Sommeliers

Wine is a living beverage, and “the older the better” is not entirely truth.

MERIDA Yucatan (La Jornada Maya) – “People believe that wines are only for special ocassions when things like orange duck are served for dinner, but honestly, who eats that. We all eat sandwiches, quesadillas, tacos, and for each one of these dishes there is a wine,” says Alberto Nacif, director of the Association of Mexican Sommeliers (ASM) in Merida.

According to the ASM, Yucatan is among the first states in the country in formation of sommeliers. It has more than 150 professionals, from seven generations, which represent the highest number per capita per state in the country.

The Mexican Wine Council announced that interest in wine culture has spread not only among restaurateurs and the tourism sector, but also among the general public. Mexicans went from consuming 250 milliliters in 2002 to 964 milliliters in 2018, according to data from the same agency. 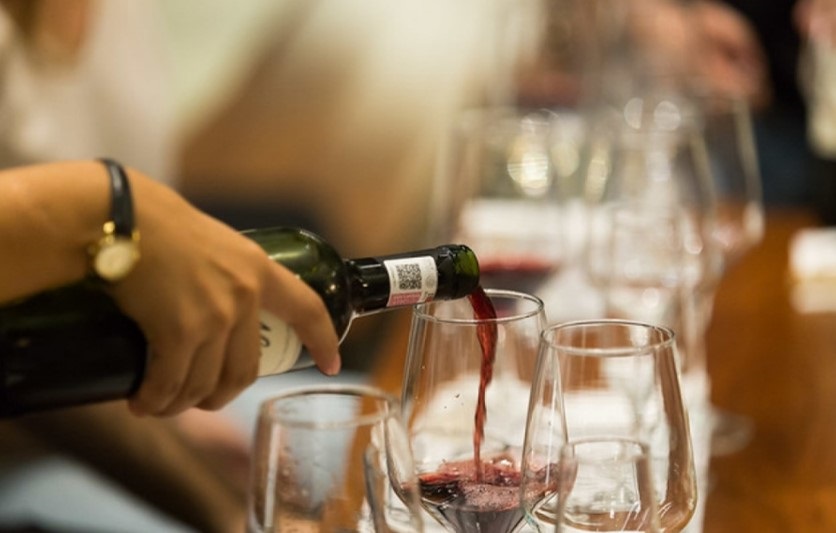 “Yucatan has an exquisite gastronomy, and where there is good gastronomy it is only a matter of time before the wine culture arrives. Wine is the best pairing for food. Oaxaca, Yucatan and Michoacán have an impressive gastronomy,” says the sommelier and owner of Micaela Mar y Leña, a restaurant with a wall full of hats and another full of wines.

The International Association of Sommeliers only certifies one academy per country, in the case of Mexico, is within the ASM, who teach a diploma in wines, who takes doctors, chefs, housewives, international relations students, or any other professionals and people who want to learn.

“Many times what they want is to experience fine dinning, enjoy their food and when something you like or you are passionate about, it is necessary to add knowledge; if not, passion alone does not work,” explains Nacif.

He mentions that before there were only a couple of places with a wine list, but now the offer is enormous. This year Mérida was chosen as one of the venues for the Grandes Pagos Wine Congress of Spain (Congreso de Vino de Grandes Pagos de España). According to the president of the Academy, Pago is a closed community of winegrowers who have a certain status. In the private event they will give lectures, will have a showroom and master class for the best sommeliers and restaurants. “It’s never happened here before,” he says.

More than elegance, wine is chemistry
Elliot Díaz, sommelier and owner of the restaurant Taninos, recommends a dry rosé or claret wine for cochinita pibil tacos, preferably made from grenache grapes. “I still haven’t come across a meal that doesn’t fit a wine, even if it’s asparagus,” he says.

Its restaurant offers a wine list from the vineyard to the table. It also carries out wine tastings where secrets of this millenary drink are shared: “the age of the plants is the secret of the wine”. And “the geography makes the aroma of the grape different”. According to the expert, New Zealand wine smells of guava, France of phosphorus and in Latin America of apple. 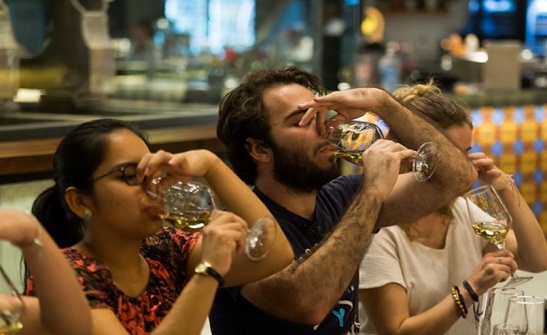 Interviewees say there are many clichés around this drink. That is why when in a wine tasting, in front of a table of cheeses and Peruvian ceviche, the sommelier tells those present to cover their nose and taste the wine, or to retain the drink on one side of the mouth and salivate from the other, the attendees look surprised.

Alberto Nacif says that sommeliers spit all the time because, although wine has less alcohol than other drinks, it is still an intoxicating drink. “Yesterday I tasted 14 bottles of wine, had one or two drinks, spit it all out. Unlike beer, which must be swallowed to be evaluated, wine with a pure palate can give you a perfect idea,” he adds.

Tasting people are even more surprised when they taste a black vanilla dessert with a rosé wine, they open their eyes as if it were the first time they have eaten an ice cream. Wine is made to enhance the flavor of food, but if you don’t drink the right wine, it makes it worse. “There is no way for the public to know which one to choose when they go to the supermarket, they have to understand wine first. It’s a food and drink culture that people don’t have because no one ever gave it to us. But now there are more and more of us (more people interested in wine),” says Elliot Díaz.

There are red, white, sparkling, rosé, orange and grey wines. Each of them has a sea of possibilities of tannins, flavor, aroma and acidity. For a wine to be a wine it must have grapes and less than 16 percent alcohol, if it has more they are called “fortified” or “headed”, except in Portugal, which are “ports”. The darker a wine is, the more powerful it is in everything. And wines, said the interviewees, are a living beverage.

Another myth is that the wine that is kept tastes better. There are two types of wine: wine made from the winery and designed to last, and wine made for quick consumption. Normally, the supermarket wines are for fast consumption. “If you buy a bottle from the supermarket and you keep it for eight years, the most likely thing is that when you open it, it won’t be good. There are certain wines that are planned to last. I’ve tasted 20-year-old wines that still feel young, but they’re not all like that,” Nacif explains. 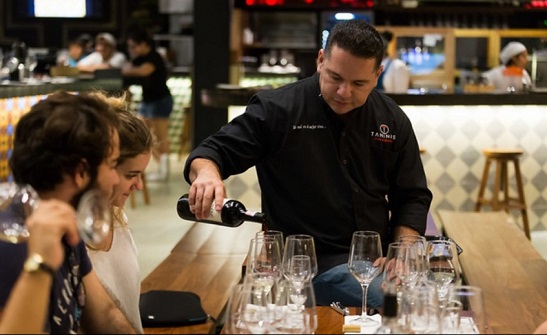 Wine… The Old and New World
The wine culture is so ancient that it can be studied biblically, enologically or mythologically. The oldest winery ever found dates from 6,000 years ago in Armenia. During the investigation for this report, the interviewees and sources consulted, constantly divided the wine from the “Old World” and the “New World”.

In the Old World (Greece, Rome, Egypt) wine has been part of history in a privileged place. However, in Mexico (New World) wine consumption is recent, does not compete with figures from South America or Europe, according to information from the Mexican Association of Sommeliers and production is little compared with that of other countries. Currently there are vineyards in Baja California, Aguascalientes, Querétaro, Chihuahua and Coahuila.

“The issue is price. We don’t produce as many liters of wine a year to have a competitive price. The first places of wine production are Italy, China, France. We don’t even appear on the list of the first 30 wines,” says Nacif.

Santo Tomás, L.A. Cetto, Casa Madero, El Cielo, are some of the approximately ten wineries that “make a great effort to bring Mexican wine to the country,” according to Nacif.

Another discussion is which is the country’s “flagship grape”? The owner of Micaela Mar y Leña says that all countries have one: Chile’s is the cabernet, New Zealand’s is the sauvignon blanc. In Mexico, he says, it may end up being an Italian variety of nebbiolo grape or the Spanish tempranillo.

“There are wines that are to be drunk at the moment and others to be kept. If you buy a bottle in the supermarket you have to take care that it does not get the sun, keep it in a cool place. Sometimes people are disappointed when they taste a wine, but it’s possible that it’s because they didn’t have it in the right conditions“, he explains. 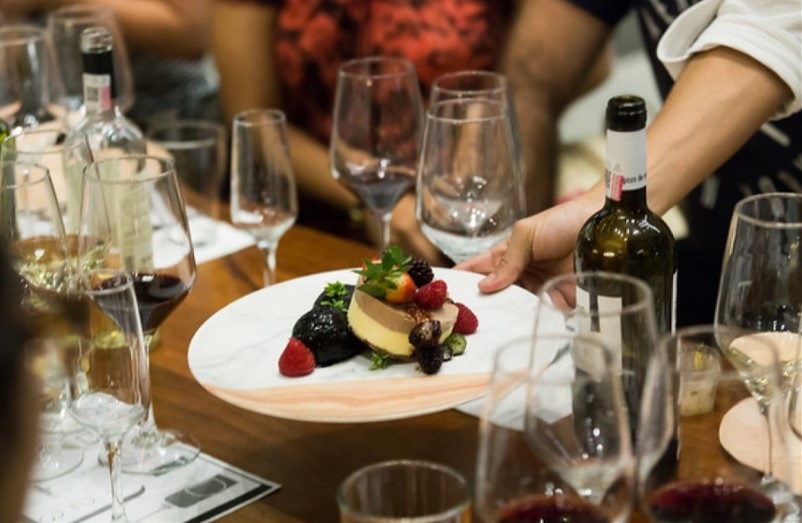 Broadly speaking, if it is red, he recommends having it at an ambient temperature of 18 degrees and not taking it so cold if they have it in the refrigerator, because the properties are inhibited. Sometimes it is necessary to wait for the wine to breathe.  If it is white, keep it at a lower temperature.

“Anyone who has not tasted a sparkling wine with black filling has not tasted it as it should be. You don’t have to spend a bottle of champagne of a thousand pesos, you can buy a good Italian prosecco of 250 pesos and pair it with the dish of every day,” advises the owner of Taninos.

Elliot Díaz says that there is currently an important community of sommeliers who organize events and tastings. Taninos opened on November 11, 2011 “and since then we are still standing,” he says.

Carolina Criollo explains that not only the wine culture is growing, but also the consumption of other beverages such as mezcal and artisanal beer, which like wine, have a why, a history and a complexity unknown by many.