Would you like to know all about the ‘Yucatan Green Gold Era’ ?

Sotuta de Peón, once one of the largest hacienda plantations for the production of natural fiber rope, was established in the 1800s just outside of Merida, Mexico. This is where henequen, or Green Gold, was produced from the fiber of agave plants and woven into rope.

The decline of this industry was caused by the increase in popularity of synthetic materials for rope making after WWII. Today, Sotuta de Peón is a living museum having been restored from its abandoned state over 25 years ago.

The fibrous leaves of the cactus were harvested, placed on mule-drawn carts, and taken to the processing plant, where they were fed into a 100 year-old stripping machine, which could process 100,000 leaves per day. The resulting long strands of green fiber were then hung to dry in the sun before heading to the “bummer press,” where they were formed into 400-pound bales for shipping to Merida several times per week for further manufacturing. The green waste material from the stripping machine was used as animal feed and fertilizer.

A walk through the museum illustrates the many types of manual processes that have been mechanized over the years. In its heyday, between 1860-1915, multiple products were produced on the plantation. 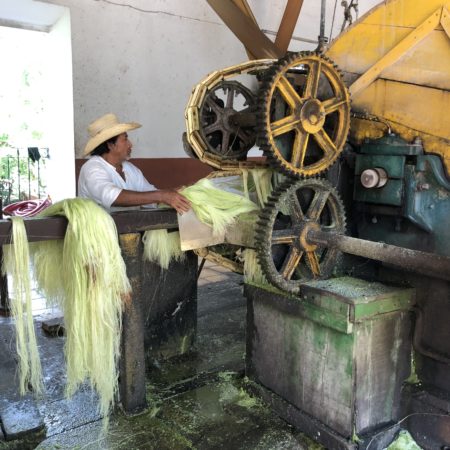 Spooling machines could twist the fibers into ropes of varying thickness, including the large gauges for marine use, especially popular during the shipping era of the early 1900s; or transform them into balls for easy transport. Looms would weave long bolts of coarse mesh which could be made into bags, mats, grain sacks or hammocks.

The original Spanish plantation owners, the Peón family, had 14 haciendas and employed the local Mayans to work the fields. Today, over 80 local Mayan families, descendants of the original workers, are employed here.

The entire area is fed by an underground water system of rivers and cenotes. The hacienda name, ‘Sotuta,’ comes from the Mayan term, “Tzu Tzut Ha,” which means circulating or moving water.

More stories from Mexico and my other travels can be found at YourCulturalInsider.com.

Sandra Cesca has traveled the world, but found herself returning to Mexico more and more. She moved to Puerto Vallarta in 2008 and never looked back. She currently offers eight different Puerto Vallarta Walking Tours,which include history, architecture, culture, artisanal crafts and ecology. Her photos and articles can be found on puertovallartawalkingtours.com; yourculturalinsider.com; sandracescaphotography.com; Instagram and Facebook. She can be contacted at sandra.learn.vallarta(at)gmail.com; or sandra.cesca.photography(at)gmail.com.