US political and economical arena on fire! 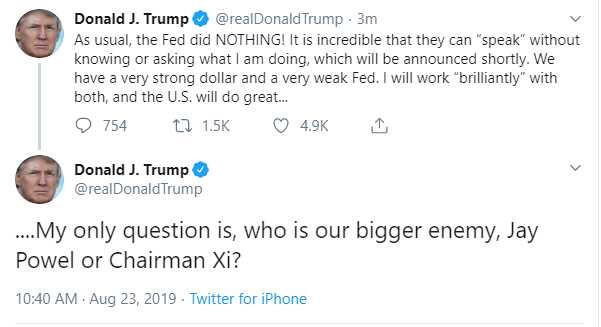 Trump tweeted his attack (which by the way originally misspelled the central bank chief’s name) not long after Powell delivered a speech in Jackson Hole, Wyoming. As he uses tariffs to try to force China to change what he calls “unfair trade practices” Trump has repeatedly said he does not blame Xi, a communist leader who has consolidated power in China.

The tweet came shortly after Beijing fired another shot in the trade conflict between the world’s two largest economies and just before Trump said that “American firms should start looking for an alternative to China.” It is unclear what authority Trump thinks he can use to stop U.S. companies from operating in China. The U.S. trades more goods with China than with any other country.

The Dow dropped more than 500 points after Trump’s tweets on China and the Fed, the National Farmers Union answered “Trump is making things worse, not better” and issued a statement today regarding China’s tariffs on US goods.

“It’s no surprise that China is slapping even more tariffs on American products. Every time Trump escalates his trade war, China calls his bluff — and why would we expect any differently this time around? And it’s no surprise that farmers are again the target. In just the past three years, US soybean exports to China have fallen nearly 80 percent, and once these tariffs kick in, things are likely to get worse. Things have been difficult for farmers long before this trade war rolled around. Farmers are making half of what they were in 2013, and they’ve taken on record levels of debt just to keep their doors open. Chronic overproduction continues to push commodity prices down, and extreme weather events and higher temperatures caused by climate change have made the job of growing food just that much more challenging. But instead of looking to solve existing problems in our agricultural sector, this administration has just created new ones. Between burning bridges with all of our biggest trading partners and undermining our domestic biofuels industry, President Trump is making things worse, not better.”

The United States political and economical arena are on fire!