Inhabitants of the municipality of Oxkutzcab, in southern Yucatan, attacked the municipal police building with Molotov bombs in the first minutes of the day and caused damage to the town hall headquarters, as well as to patrol cars, protesting the death of a 21 year-old man inside the municipal jail.

Although it was officially handled as a suicide, locals complained that the young Genaro Vázquez Ruelas, 21, was beaten to death inside his prison cell by police officers commanded by Commander Carlos Xool.

According to the first versions, the attackers were mostly young friends of Genaro, three of them have been already arrested by agents of the Ministry of Public Security, as this corporation announced this morning.

The State Police also said it will provide the evidence to request arrest warrants against individuals who attacked  municipal police officers with stones and Molotov cocktails, damaging official vehicles and the town hall headquarters.

During the attack, state police came in support of municipal authorities to prevent the situation from worsening, they used tear gas to contain the aggressors, while the municipal building remains protected by police officers.

For their part, the State Prosecutor General’s Office and the town hall said that, after the events, the death of Vázquez Ruelas is investigated by the corresponding authorities.

Regarding the death of the young man inside the premises of the municipal jail, the city council headed by Raúl Romero Che issued a press release, where different details about the death are established, in addition to ensuring that a formal investigation will be carried out and if there is responsibility on the part of any public servant, the responsible will be triales and prosecuted. 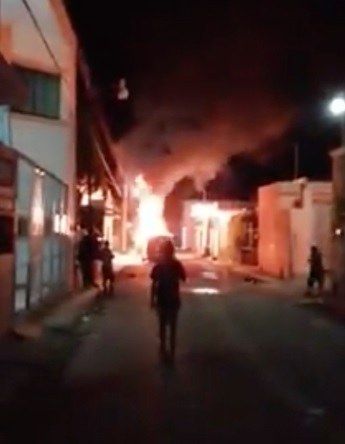 “The City of Oxkutzcab is currently undertaking the internal procedures necessary to sanction and make available to the authorities those who participated in this unprecedented violent episode,” he said.

In relation to the death of the young man in jail, the statement cites that the municipal authority “expresses its regret at such an unfortunate event” and guarantees openness for the corresponding instances to carry out the investigations.

In videos spread through social networks, residents of Oxkutzcab can be seen expressing their discomfort during the riots. So far, the extent of material damage has not been evaluated nor reported.