Two vacation spots that could kill you

In the last century human activity has increased the life span but has reduced the quality of life by constantly damaging nature. Adding up to human stupidity, the need of bragging about “a perfect life” has taken us to be firsthand witnesses of people dying while trying to take the perfect photo.

Here are two places where a selfie could kill you:

The “Russian Maldives”
The shores of this crystalline blue lake are always full of people looking for the perfect selfie to show off in Instagram… However, its waters contain components that can be highly dangerous.

This place is known as the ‘Russian Maldives’ and it is nothing more than an artificial lake, a basin created by the local heating plant and subsequently filled with water.

As shown in the article of “Russia Beyond” the “Russian Maldives” is an artificial basin created by the local heating plant and subsequently filled with water. The crystalline colour is not due to a clean water spring, but is the result of the products flowing into it: the thermal power station pours into this basin ashes and slag resulting from the combustion of coal. In other words, waste. 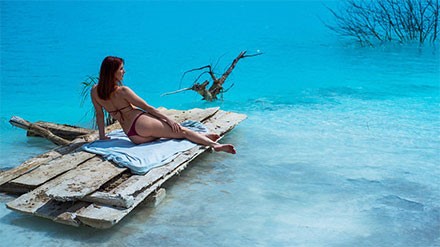 The ‘lake’ became tremendously popular with the local people, who despite the danger are heading here to take a couple of perfect photos.

During the summer, the shores of this crystalline lake are always full of holidaymakers: they come in mass from the cities to show off in Instagram. But this reservoir is nothing more than the landfill of the nearby thermal power station: dangerous components are dissolved inside.

This place, where the water is blue even on the most depressing days, is known as the “Russian Maldives”. In these photos you can get an idea of the place… and the colours are not obtained by means of the Instagram filters!

The toxic dam of Puebla.

In Mexico, on the other side of the world, we have our own “Maldives of foam”.

Just a few years ago, people used to go the Valsequillo dam to fish or waterski, but that’s not the case anymore. (In October 2014, thousands of fish were found dead at the Valsequillo Dam, in Puebla).

It was through its social networks that the civil association “Dale la cara al Atoyac” presented different images of the Valsequillo dam, in the State of Puebla, completely covered with a strange toxic foam that has swallowed pets, humans and even a car, as it happened to Juan Ignacio Mendoza Aguirre, who on Sunday July 21st, fell into an irrigation canal for trying to take a selfie in the toxic foam generated by the current in the Valsequillo dam, in Puebla, Mexico.

The organization assured that the problem has persisted since July and that the authorities have ignored their complaints, something that “Agua Puebla” denies, because they indicate that although they are working to reduce pollution in the dam, the toxic foam is due to high concentrations of soap. 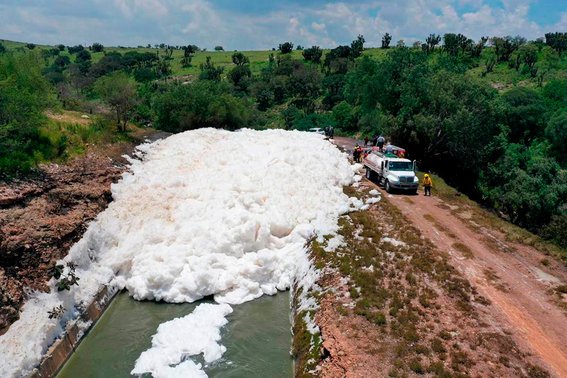 Why is this foam so toxic?
According to Milenio and El Sol de Puebla newspapers, this foam is formed by chemicals such as lead, cadmium, copper, phosphorus, nitrogen, detergents, pesticides, solvents and paints, as well as organic matter and automotive oil, which makes it highly toxic.

What these soapy substances do, when mixed with the water that runs in the dam is a ‘washing effect’, ie, foam is produced endlessly until, somehow, ‘rinsed’, as is done when we are washing clothes.

Things take a different and dangerous course, when we know that the water from the Valsequillo dam is also used to irrigate about a thousand hectares of crops in municipalities of Puebla, including Tecamachalco, Quecholac, Acatzingo and Palmar de Bravo.

Let’s not forget, the dam also receives all the organic matter generated in the surrounding houses, which is discarded by the drains that flow into the Valsequillo dam. 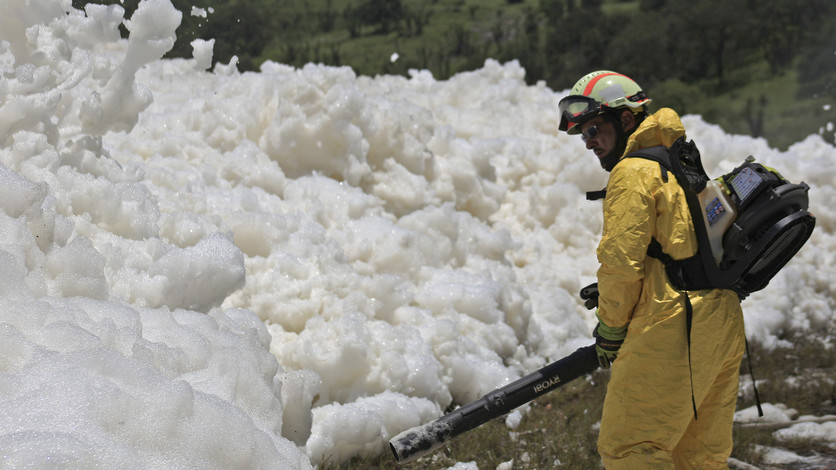 Remember kids… radioactive and toxic waste vacation spots, could be damaging to your health!