“Luis “N”, a 24 year-old “professional basher” infiltrated the protest conducted by women against gender violence… At certain point, he brutally attacked the journalist from ADN40.

CDMX (Agencies) – Last Friday Aug. 16, a man, allegedly by orders of another subject, knocked out reporter Juan Manuel Jimenez in a live broadcast

The man who viciously beat up the reporter, was part of a group hired to inflict chaos and violence during the march against gender violence. His name is “Luis N” and has been arrested by agents of the Investigative Police (PDI) of the Attorney General’s Office in CDMX. 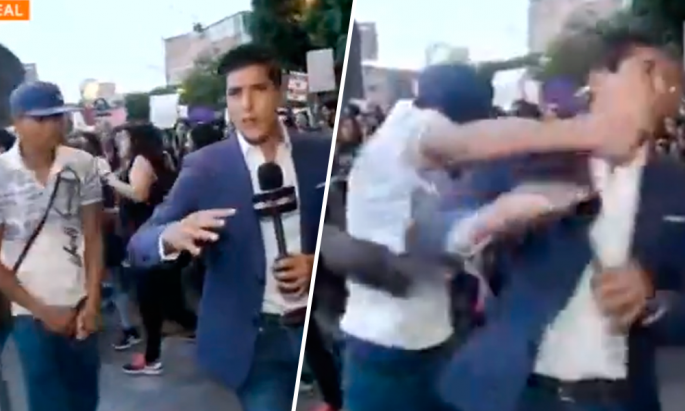 “Luis “N”, a 24 year-old “professional basher” infiltrated the protest conducted by women against of violence. At certain point, he attacked the journalist from ADN40.

The television channel director, Luciano Pascoe, thanked Claudia Sheinbaum’s government “for its commitment against impunity and in favor of freedom of  press”.

“Luis N”
It was originally mentioned in social networks that “Luis N” was part of a criminal group called “Los Buitres” although it has been confirmed that the group is called “Los Claudios” who are linked to drug trafficking, kidnapping, robbery and invasion of properties. Since 1997 they have been working with the radical wing of the PRD (currently part of MORENA) to intimidate and/or beat political opponents.

“Luis N” is a professional basher under the command of Claudio Gonzalez Gonzalez, head of the “Los Claudios” criminal group, accused of being involved in the kidnapping of several businessmen in Mexico City and the State of Mexico.

“Los Claudios” are also linked to “Asamblea de Barrios” a criminal organization that takes over empty properties, invades them, and later distributes them among its members, mainly in the Cuauhtémoc delegation.

In 2016, “Los Claudios” were involved in a kidnapping that culminated in a bloody shooting on Benjamin Hill Street next to the “Asamblea de Barrios” headquarters in the Cuauhtemoc delegation.