Police say a man was arrested Thursday after he showed up at a Springfield Walmart store with a loaded rifle and a bulletproof vest.  Lt. Mike Lucas with the Springfield Police Department said the incident occurred at about 4:10 p.m. at the Walmart Neighborhood Market on West Republic Road.

Lucas said the man showed up to the business with body armor and military-style clothing and then walked inside carrying a “tactical rifle” and another gun.

As shoppers were panicking and fleeing the store, Lucas said the man was taking video on his phone and making comments to people while pushing a shopping cart.

Lucas said the suspect then walked out of the store, where an off-duty firefighter held the suspect at gunpoint until police arrived moments later.

The suspect, a 20-year-old white man, was arrested, but Lucas said police are still working to determine his motives and whether he intended to shoot anyone.  “The man had more than 100 rounds of ammo. His intent obviously was to cause chaos here, and he did that,” Lucas said.

This incident comes five days after a gunman opened fire at a Walmart in El Paso, Texas, killing 22 people.  Lucas said Springfield police officers arrived on scene 3 minutes after the initial 911 call Thursday. He said the scene was chaotic.

He described the suspect as “pretty stoic” during the initial police contact. He said officers would be interviewing the suspect at the jail on Thursday to try to learn more about his motivations.

“His intent was not to cause peace or comfort to anybody that was in the business here,” Lucas said. “In fact, he’s lucky he’s alive still, to be honest.” 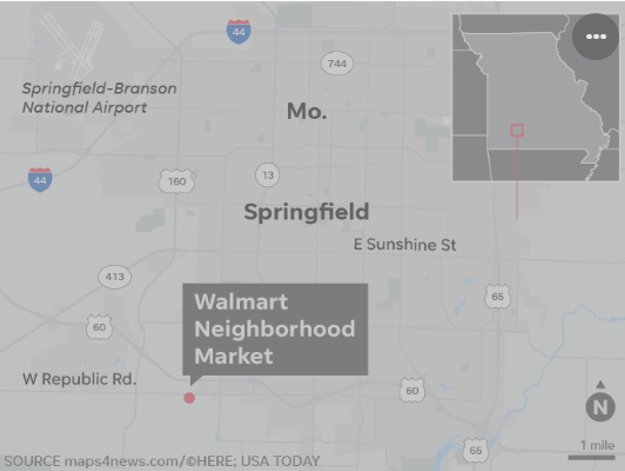 Julie Belew of Springfield said she stopped at the store Thursday afternoon to buy milk, and before she could exit her car she heard someone nearby shout: “Is that a real rifle?”

Walking straight toward her Kia Soul, coming down a grassy rise, was a young man with a rifle, wearing a bulletproof vest and military-style clothing. He had his hands raised.

She turned and saw another man near her car aiming a handgun at the man coming down the hill. Belew now believes this was the off-duty firefighter, who responded when he saw the man with the assault rifle.

Someone shouted at the man, “Why are you walking around in a tactical jacket carrying a rifle?” Belew said. She did not hear what he said back.

Lucas said police would be reviewing any surveillance video from the store and also checking the suspect’s social media accounts to see if he was live-streaming the events.