More than two dozen people were injured in the shooting at Walmart, where some of the chaos was caught on camera. Images showed victims lying in the parking lot.
Police say they have a 21-year-old man in custody in connection with the shooting, and they believe he is the author of a racist, anti-Hispanic document laying out his motivations for the shooting.
Here’s what we know:

Where the shooting took place 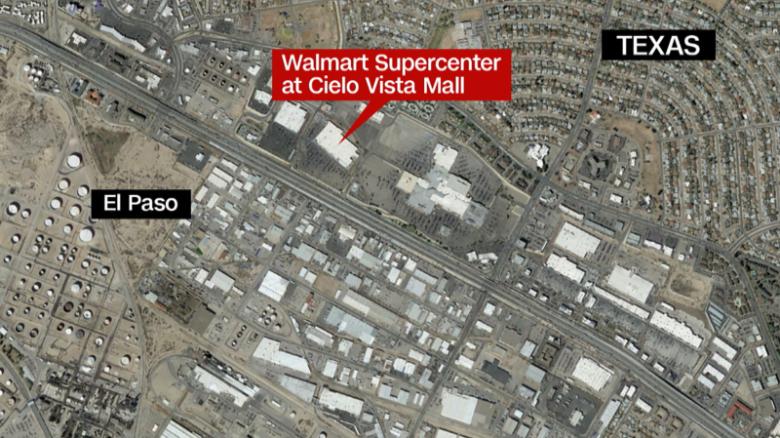 The shooting took place at the Walmart, near the Cielo Vista Mall, Sgt. Robert Gomez, an El Paso police spokesman, told reporters.
Police began receiving reports of an active shooter just after 10:30 a.m. Police received multiple calls from stores at the mall complex, where Walmart sits.
In a shaky Snapchat video aired by CNN, a woman holding the camera runs through a mall department store and into a parking lot.
As the group hurries past racks of clothes and cases of merchandise, voices off camera shout, “Hands up!”
Another video, shot from outside the Walmart, showed people lying on the ground, some of them next to a table set up by the store’s entrance.
“There’s a man lying down at the stand that a school set up,” the man holding the camera says in Spanish.
“Help!” a man screams in English.
“We need CPR,” someone else says. “We need CPR.”
Gomez said it’s estimated that up to 3,000 shoppers and 100 employees were inside the Walmart. 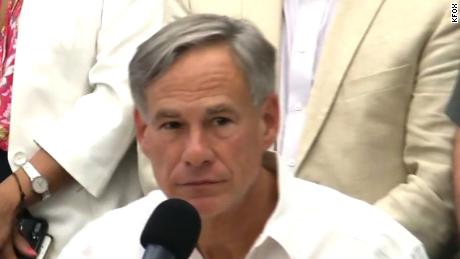 At least 20 people were killed in what was “one of the deadliest days in the history of Texas,” Abbott said Saturday evening.
The victims have not been publicly identified, with authorities citing the investigation and pending next of kin notifications.
Three Mexicans were among those killed, Mexico President Andrés Manuel López Obrador said via Twitter.
At least 26 people were wounded, El Paso Police Chief Greg Allen said. Twenty-four of the injured were taken to two area hospitals, two hospital spokesmen told CNN.
Six Mexican citizens were among the injured, Mexico Secretary of Foreign Affairs Marcelo Ebrard said via Twitter. 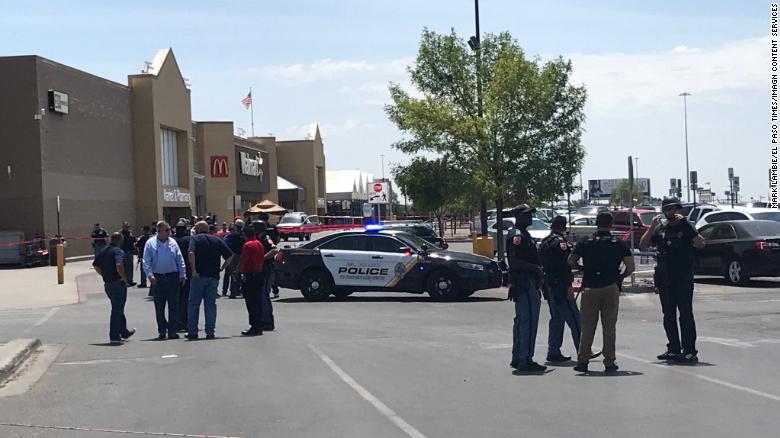 Police gather outside the Walmart at Cielo Vista Mall where an active shooter was reported.
Thirteen people were taken to the University Medical Center of El Paso, where one died, medical center spokesman Ryan Mielke said.
Eleven people were transported to the Del Sol Medical Center, Dr. Stephen Flaherty said. Eight are in stable condition and three are in critical condition, and the patients ranged in age from 35 to 82, he said.

Who carried out the shooting

The suspect in the deadly shootings at the shopping complex has been identified as Patrick Crusius, 21, of Allen, Texas, a Dallas suburb about 650 miles from El Paso, three sources told CNN. 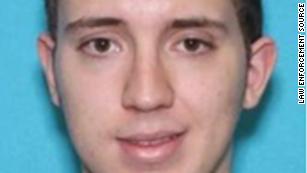 Patrick Crusius
Allen said the shooter surrendered to officers when they approached him in Walmart. He faces possible capital murder charges, he said.
Collin College, northeast of Dallas, confirmed in a written statement that Crusius was a student there from 2017 to 2019.
“Collin College is prepared to cooperate fully with state and federal authorities in their investigation of this senseless tragedy. We join the governor and all Texans in expressing our heartfelt concern for the victims of the shooting and their loved ones,” College President Neil Matkin said.

Where the investigation stands

Initial reports were that the weapon used in the shooting was a rifle, El Paso Police Sgt. Enrique Carillo told reporters.
The FBI in El Paso took to Twitter to ask anyone who took video or pictures during and after the shooting to submit them to investigators.
The crime scene will “be in play for a long period,” Chief Allen said. “Unfortunately, the deceased will remain at the scene until the scene is processed properly for evidentiary purposes to be gathered for later prosecution.”
The shooting is being investigated as a murder, but authorities say there are some aspects that indicate the possibility of a hate crime.
“Right now, we have a manifesto from this individual that indicates to some degree that it has a nexus to a potential hate crime,” Allen said.
The FBI cautioned the investigation is still in its early stages, and more work needs to be done to determine if it was a hate crime.
“There is potential for a number of different other violations, and we’re reviewing all the evidence to make a determination as to what potentially else is out there, in addition to the violations that have been stated that the local authorities are pursuing,” FBI El Paso Agent in Charge Emmerson Buie said during Saturday evening’s news conference.

Law enforcement officials are investigating a four-page document posted to 8chan that they believe was written by Crusius. 8chan is an online message board rife with racist and anti-Semitic conspiracy theories.
The document was attached to a post on 8chan that said, “I’m probably going to die today.” A CNN analysis of the 8chan post found it was posted less than 20 minutes before police received the first calls about the shooting.
It is filled with white nationalist and racist hatred toward immigrants and Hispanics, blaming immigrants and first-generation Americans for taking away jobs and the blending of cultures in the US. 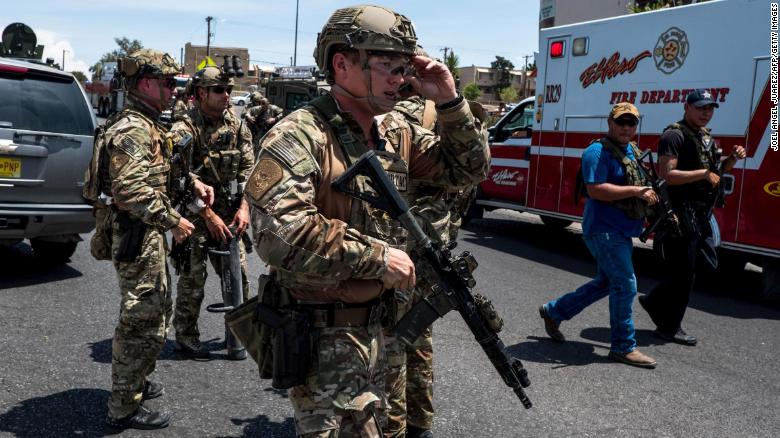 Law enforcement agencies respond to an active shooter at a Wal-Mart near Cielo Vista Mall in El Paso, Texas, Saturday, Aug. 3, 2019.
The writer discussed fears of an influential Hispanic population in Texas that would make the state a “Democratic stronghold.” The writer also said “the Republican Party is also terrible,” because the Republican Party is pro-corporation, which can lead to more immigration. The writer wrote that their opinions on immigration predate President Trump, and the writer appears to have held these beliefs for years.
The post further says the writer took less than a month to plan the shooting and describes the weapons used.
Facebook says it is working with law enforcement. Facebook and Instagram profiles under the suspect’s name have been removed by the company.
Facebook and Twitter say they are working to prevent people from sharing the document. Despite the companies’ claims that they are removing the writings, CNN was easily able to find multiple versions of the writings on the platforms.
“We’re proactively removing content that violates our policies and will be engaged with law enforcement, as appropriate,” a Twitter spokesperson said.
CLICK HERE FOR FULL ARTICLE ON CNN