The U.S. Food and Drug Administration is coordinating with the U.S. Centers for Disease Control and Prevention (CDC) and state agencies to investigate 127 human cases of salmonellosis related to several types of Salmonella with a suspected link to pig ear pet treats, some of which originated from Argentina and Brazil.

UNITED STATES (FDA-newsroom) – Following concerns that arose a few days ago in the United States about an outbreak of salmonella related to pork ear treats for dogs, the CDC and the FDA have issued two communications with a clear message: no one should buy these snacks. 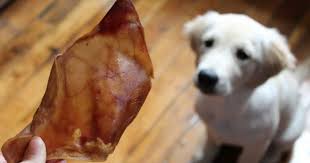 So far the agencies can’t link the multi-state outbreak to any supplier, but they advise against buying or feeding such treats to animals. Not only that, and just as important, they warn that owners shouldn’t touch them either.

According to the CDC: “A total of 127 human cases of salmonella poisoning that have been reported in 33 states, have been linked to dog treats, which are usually intact, dehydrated pork ears, although they can also come from other parts of a pig, which often have added flavoring”.

By chewing or eating ears, animals can contract salmonella, the bacteria that causes foodborne illness and causes symptoms such as diarrhea, vomiting, and fever, and sometimes requires hospitalization. In pets, symptoms may also include bloody diarrhea and fatigue.

The FDA and CDC are also warning consumers to avoid touching the snack, as the infection can easily be passed from a surface to the hands. “If hands aren’t washed, the bacteria can spread to other surfaces or to a person’s mouth, causing infection. A dog that has just eaten salmonella and then licked someone’s face or open wound can also transmit the bacteria,” the FDA said.