The Mayan civilization and culture are amongst the most interesting in history, but equally disturbing and mysterious. Mayas are known for their advanced technology and architecture linked to astronomy and a strong influence of their theocracy, in which religion was a fundamental part of their values and ways of perceiving life and death.

As time goes by, every day we know more about the Maya and the fact that they were a warrior society, something that was previously unknown. Therefore, we present to you 5 Mayan deities associated with death and war. 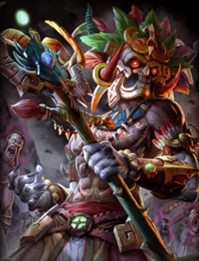 1. Buluc Chabtan
In the Mayan codex it can be recognized due to the black arch that surrounds the eye and that goes down on the cheek.

Among the companions and gods associated with Buluc-Chabtan is the god Ka-Ku-Pakat, whose function was to recognize the positions occupied by the enemy before the battle, and the god Pakok-Exchun-Kak, which was associated with the cardinal points, the spread of fury and divine intervention in battle.

Buluc Chabtan was often associated with the number eleven, which sometimes appears as a glyph above his head. The day that was consecrated to him within the Mayan calendar was the “manik” day.

2. Chac Bolay
Jaguar God, represented with the body covered with stains, with a jaguar head, protruding incisor teeth and a tuft of side hair, was the incarnation of the jaguar, an animal that symbolized strength and power in the Mayan civilization.
It was also who represented the passage of the sun through the underworld, the Mayas affirmed that the god of the sun became a jaguar and traveled through the darkness in the world of the dead.

The Maya admired the jaguar for the strength and skill that this animal possessed to hunt, in addition it represented other divinities, so much of the natural world as supernatural, reason why it was respected and praised as the lord of the animals.

According to their beliefs, the jaguar dominated the cosmic forces of day and night, therefore it was a nocturnal and twilight feline, it was also considered a sacred and unique symbol, as a series of deities acquired several of its qualities.

Within the Mayan culture, this feline represented what was in the cosmic space, it also symbolized life and fertility. The importance of this animal was such that many of the buildings constructed in pre-Columbian cities referred to it.

3. Yum Kimil
God of death who governs the Xibalba, the Mayan underworld. Yum Kimil is one of the most feared gods of the Maya, as he was the god of death and the one who possessed the dominion in hell. This god had a very own and striking appearance, however over time some inhabitants of the Mayan region assimilated him with some animals.

The animals that represented this omnipotent being were owls, dogs and jaguars, since for the Maya, these were symbols of authority.

Yum Kimil was also known as “Ah Puch“, “Kisin” (the flatulent one) or “Kimí” (death) and his representation emulated a corpse in a state of putrefaction; bald, with a swollen belly, skeletal face, thin body and skin with spots of decomposition and emanating from foul gases.

The union between Buluc Chabtan and Yum Kimil symbolized the tradition of the sacrifices of prisoners of war. 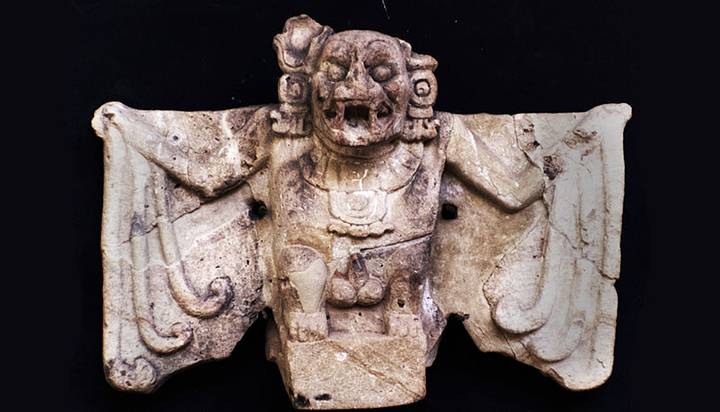 4. Camazotz
The bat god lived in one of the deepest and most rugged levels of the Xibalbá, a gloomy and chilling place where the only sound that could be perceived was that of the screams of bats. According to the Popol Vuh, sacred book of the Maya, bats were creations whose only objective was to decapitate the first human beings who were made of wood. The Mayas represented Camazotz as a human being with a bat’s head and wings, triangular teeth coming down from the corners of its lips, a face instead of a phallus and powerful claws to decapitate prey. 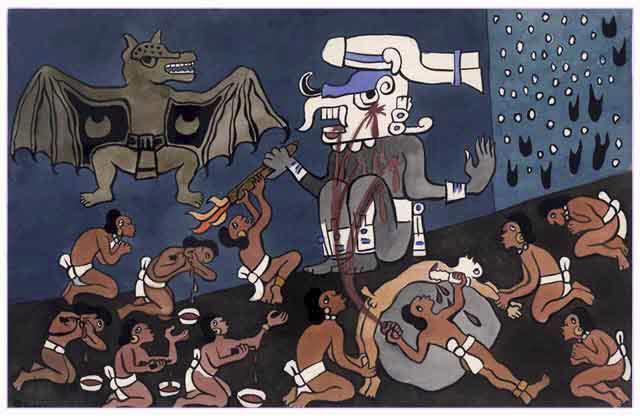 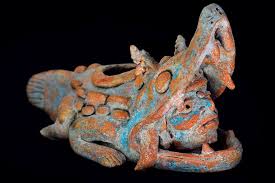 5. Zipacná
Zipacna was in Mayan mythology the son of “Vucub Caquix” -“The Seven Macaws”- and Chimalmat-. He and his brother, “Cabrakan” -the Earthquake-, were considered demons. Zipacná, like his relatives, was said to be very arrogant and violent and often boasted of being the creator of the mountains.

This demon or false god of the mountains, looked like an alligator.

The Popol Vuh tells that he possessed a powerful force unworthy of man, so a murder was planned and “Zipacná” managed to fake his own death and then surprise his killers and kill them demolishing their home.  Zipacna and his brother were known for their strength, violence and arrogance.