Angry by what they consider an abuse of authority, Chelem residents stone a municipal police truck

Chelem, Yucatán, Aug. 28, 2019.- Chelem residents accused Progreso municipal police of abuse of authority in the arrest of a 68-year-old man, in violent acts that included the arrest of two other individuals and the stoning of a police vehicle.

In addition to the dents from the stoning, the official vehicle also suffered damage when it was collided by a van in which the 68 year-old man wanted to flee the scene, when he was caught selling beer clandestinely.

The events occurred on Wednesday Aug. 28, at approximately 10 in the morning on Calle 23 (between 24 and 26) in Chelem, where Progreso municipal police officers were conducting a routine surveillance operation.

Suddenly the officers saw José E.V.L., 68, allegedly selling beer clandestinely, and when they got off to stop him, the man boarded a white truck and intended to run away, but the official vehicle blocked his way.

The suspect did not stop and collided with the patrol, causing damages to both cars.

This led to the arrest of José E.V.L., and of his companions Edwin Alberto Magaña Valle, 38, and Juan Carlos Lira Ek, 43, who tried to prevent the arrest.

The police officers chased the two other men through the streets of the port, caught them, and put them in the official van along with the other detained, in the midst of people’s claims.

Finally, police reinforcements arrived and things calmed down. However, several residents of Chelem uploaded videos of this detention to social networks.

Two uniformed men resulted injured, one with a bruise on the abdomen from the stoning, and the other one ended up with an injured right shoulder and a bruise on the chest.

The three detainees were sent to the municipal jail in Progreso, accused of disturbance, vandalism, damage to a patrol and police injuries. 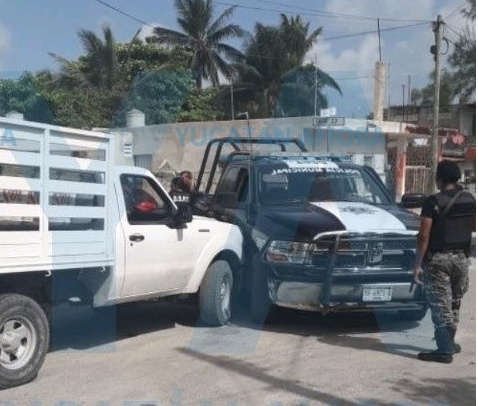