Andres Manuel Lopez Obrador raised his level of approval among Mexicans to 73%, prior to his first government report, revealed the polling house Enkoll, in a joint exercise with “La Silla Rota“, “Noticias MVS” and “Publimetro”.

This percentage represents an increase of three points over the previous measurement, made in May this year when the popularity of the president was positioned at 70%.

The population aged 65 or over was the one with the highest approval rating with 79%, followed by young people aged 18 to 24 who presented an approval rating of 76%. In contrast, people aged 45 to 64 gave a pass of 69%, the lowest level of the exercise.

The study conducted throughout the country, detailed that Mexicans believe that insecurity is the country’s main problem followed by corruption, which dropped two points over last May.

Unlike previous deliveries, unemployment increased from 5% to 7%. 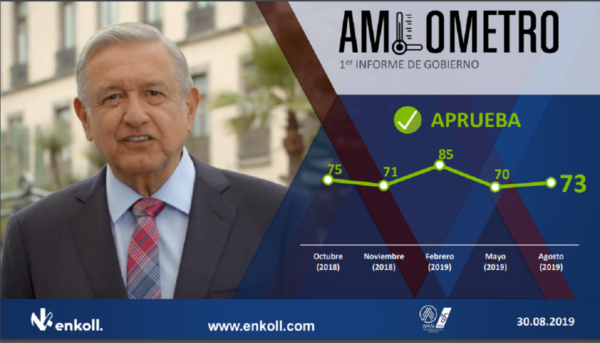 Government support
When asked if they received any support from the federal government, 11% answered in the affirmative, of which 43% were people 65 years of age or older; 11% from 18 to 24 years of age; and 9% from 34 to 44 years of age.

The socioeconomic levels that give the most support to AMLO were stratum E (poor) with 24% and D+ (Lower middle class).

Mexicans with low expectations
About the future of the country in the next 12 years: