The capital of  Yucatan now has around 40,000 new trees, which were planted in the last 12 months with the support of citizen groups, to recover green areas and help to mitigate the effects of global warming and climate change.

The Secretary of Citizen Participation of the City of Mérida, Julio Sauma Castillo, explained that these trees are part of a large-scale reforestation project that is taking place in the “White City”, and the plan is to plant another 60 thousand trees in the next two years.

In that sense, he stressed that the participation and commitment of citizens has been vital, not only to carry out the planting operation, but also to take care of the trees until they reach adulthood and consolidate as new “urban trees” specimens.

“All of us who live in this city have noticed how in recent years, the thermal sensation caused by extreme heats is getting higher and higher every year. In fact, according to local authorities, thermal sensations of more than 54 degrees Celsius (129°F) have been reported in Mérida lately, and for much longer periods of time” he stated. 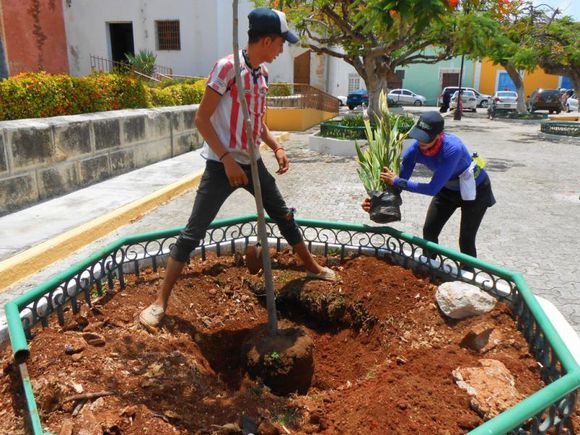 “In recent decades, Mérida has had an intense urban and residential growth, large forest areas have become housing complexes and many trees and green areas have been lost, so our city is now much more vulnerable to global warming”, he continued.

“Fortunately, the citizen involvement in this reforestation plan has had a good response. Today, the municipality has the help of some 200 neighborhood committees that support this work at the points where it is necessary to recover green areas, and there is an increasing interest of citizens to join this cause. In addition, we are currently working on the design of 15 spaces that will be used as parks. This work is being carried out in collaboration with residents of the different areas, they are contributing with ideas and they are getting deeply involved in the project” the Secretary added.

Sauma Castillo recalled that last week, the Merida Mayor’s Office launched the “Ya’ax Taal” park plan, a project that seeks to integrate through new tree plantation, the construction of paths, cycle paths and pedestrian areas, an area of 12 hectares to turn it into a new “green lung” for the Yucatecan capital.

“This new “lung” is located in the west side of the city and will connect emblematic points such as the Animaya Zoo, the Xoclan Eco Archaeological Park and the Yucalpetén Green Walk, among others”, the Secretary of Citizen Participation of the City of Mérida, Julio Sauma Castillo concluded.