Yucatan cenotes to be sanitized with biotechnology

MERIDA, Yucatan (Times Media Mexico) – The civil organization “Rios Limpios” a “water rescuers” organization will begin a permanent program of cenotes sanitation in Yucatan, but with the use of a new technology that has already been applied successfully in Mexico and other parts of the world.

According to Sergio Grosjean Abimerhi, director of the Grosjean Expedition Group, 60% of Yucatan cenotes have some degree of water contamination. The group is also dedicated to cleaning up cenotes through diving, mainly fecal bacteria and contamination with garbage.

Data and statistics from the Secretariat of Sustainable Development in Yucatan revealed that about 60% of the 2,241 cenotes registered in the state have pollution problems, such as garbage and waste.

The group also shared that in 10 years of operations, they have always sought to involve the authorities in the cleaning of the cenotes to keep them garbage free. In a special way, they seek the collaboration of the “ejido” authorities, who are the ones supposed to be responsible to lead the cleanup tasks, because are natural resources that can be used to develop tourism projects.

Based on data from the state secretariat, it is estimated that this type of ecosystem could be twice as large, since many are inside private properties or in places of difficult access.

The area with the greatest presence of these water reservoirs is the east of the state, where 813 are already perfectly located; that is, 30% of the total duly documented by the state agency.

One of the partners of “Clean Rivers” is the Peruvian scientist (of Japanese origin) Marino Morikawa, who has treated the water of more than 30 different ecosystems in the world through the use of biotechnology. He specializes in the decontamination and recovery of wetlands and lakes through the principles of biotechnology and nanotechnology. He uses bacteria, fungi and microorganisms to clean contaminated water and is the inventor of the “micronanoburbujeo” (micro nano-bubble) system.

What is this new system?
This system is a technique that consists in the production of bubbles 10 thousand times smaller than those of carbonated drinks that remain between 4 and 8 hours in the water, time during which they trap and immobilize the viruses and bacteria after which they destroy them and evaporate. The Peruvian scientist also designed biological clay filters so that inorganic contaminants, such as heavy metals and minerals, adhere to the surface and are destroyed by bacteria.

Company run by a Mexican
Ríos Limpios is led by Mexican Eduardo Negrete, who will lead the cleaning, sanitation and reforestation project and the collective brigades for garbage collection that he plans to employ in Yucatán beginning in mid-August.

The organization learned about the pollution problems in the cenotes through PAN senator Raúl Paz Alonzo and agreed with its partners to establish one of its offices in the state and to organize a series of activities that it already applies in other states of the country for the benefit of water bodies.

Collaborates on legal reforms
According to information provided by Senator Paz Alonzo, Ríos Limpios was formed in April 2017 to clean, conserve and bioremediate water reservoirs nationwide.

Paz is a founding member of the Alianza México Sin Plástico (Mexico Without Plastic Alliance) and has been participating since last November in the elaboration of the reforms to the General Law for the Prevention and Integral Management of Waste to combat the plastic pollution in conjunction with the Environment, Natural Resources and Climate Change Commission of the Senate. 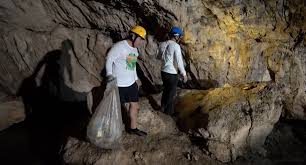 4 bodies of water
To date, Ríos Limpios has removed 350 tons of garbage and is intervening 4 bodies of water with biotechnology to bioremediate the water pollution problem in them, and generate public spaces and clean water. They have a presence in 8 states of the republic, being Yucatan the focus of cleaning and bioremediation works, since underground rivers are not considered in the national water law and require extreme attention.

It always involves civil society, private initiative, foundations, educational institutions and the government because it considers this work to be joint.

Among this type of technology most notable achievements is the intervention in the legendary lake of Xochimilco in CDMX, Presa Madin and Valle de Bravo in the state of Mexico, Boca del Río in Veracruz, Bacalar in Quintana Roo and Chapala Lake in Jalisco.