Work on Dos Bocas refinery to begin in 3 days

Lopez Obrador assures that the hiring of personnel is already underway, the head of the SE, Rocío Nahle, reports that five packages were tendered for construction

CDMX. – President Andres Manuel Lopez Obrador said that after hiring staff they will begin to work in order to build the refinery of “Dos Bocas”, in Tabasco, so they can accomplish the production of fuel needed in the country and thus avoiding fuel imports.

In his traditional morning conference at the National Palace, the president explained that this work seeks to add value to the raw  crude oil from Mexico and avoid the selling of the oil and the buying of the gasoline.

López Obrador reiterated that during the “neoliberal” period no single refinery was built and Mexico went from being self-sufficient to buying 70 percent of the gasoline it consumed  as a country.

In this regard, Secretary of Energy, Rocío Nahle, commented that the construction of the Dos Bocas refinery has begun with site preparation, work that is constituted by the improvement of soils, earthworks and conformation of platforms and fencing the perimeter,among others.

Nahle clarified that at Dos Bocas refinery  more than one million barrels of oil a day will arrive and because its proximity to docks, oil terminals, storage tanks, and because the land is federal property, distribution will be garanteed.  “We are going to increase national production, supply, detonate development in southeastern Mexico, produce cleaner products, and an impact on social due to the creation of jobs and infrastructure,” she said.

Nahle also mentioned that five “packages” were tendered for construction, and now with the winners of “proven experience in this type of work”  the construction will begin on August 1 and the refinery is expected to be ready in July 2022.

Nahle explained that before August 12  they expect SEMARNAT to deliver the environmental impact study. 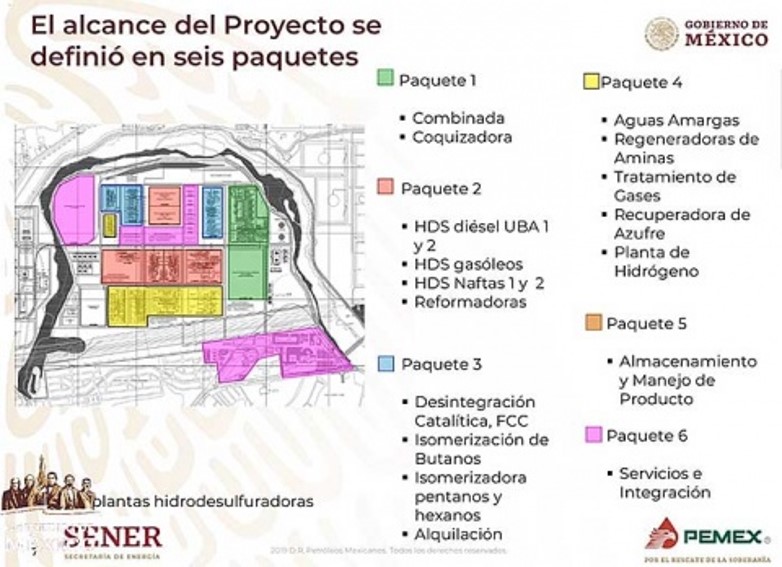