BARBADOS (Agencies) – The search for two Americans who went missing since June 24 after renting a Jet Ski in Barbados was called off by the country’s coast guard. Roy Morris, press secretary to Barbadian Prime Minister Mia Amor Mottley, told CNN and other news outlets.

The United States, which was helping with the search, withdrew its assisting aircraft on Saturday, Morris said. 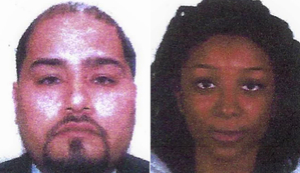 Oscar Suarez, 32 and Magdalena Devil, 25, rented a Jet Ski from a local company at Holetown Beach in Barbados. When they didn’t return 20 minutes later, the operators became worried and contacted other operators in the area to search for them, according to police. Both were wearing life jackets when they were last seen.

The Police Marine Unit and Barbados Coast Guard both searched the waters but did not find the couple or the Jet Ski, police said. Authorities also checked with the management of the hotel where the Americans were staying, but neither of them had returned.

Mottley told reporters that searches typically last 72 hours but she had instructed authorities to continue looking for Suarez and Devil for an additional three days.

“We need to literally ensure that we have exhausted every possible opportunity with respect to finding your relatives,” Mottley said, addressing the couple’s family members.

The family desperately handed out flyers on a beach on the island’s west coast hoping to find answers.

A jet ski rented by two New Jersey residents who have been missing in Barbados since June was recovered Sunday. The watercraft was recovered about 250 miles northwest of Barbados, off the coast of Guadeloupe by a French navy ship, Roy Morris, press secretary to Barbadian Prime Minister Mia Mottley, confirmed in a statement to CNN.

Nation News, a Barbados newspaper, reported that French authorities notified the Barbados Coast Guard Saturday that they believed they’d found the jet ski involved in their search-and-rescue operation and assigned a rescue boat to retrieve the watercraft.

Morris confirmed that the registration number of the watercraft matched that of the one rented to Magdalena Devil, 25, and Oscar Suarez, 32, near Holetown Beach, Barbados, on June 24. The couple has not been seen since.