The Mayan Train a “project of death” – indigenous representatives claim

“We are concerned about this idea of development that comes from outside, we have been told that our way of living and seeing the world is not valid,”

MEXICO CITY (Appro) – Representatives of the indigenous Maya communities of Quintana Roo and Yucatan, as well as the Mexican Civil Council for Sustainable Forestry (CCMSS) expressed their open opposition to the construction of the Mayan Train and assured that they will seek the necessary legal resources to halt this “project of death”.

During their participation in the presentation of an online cartographic visualization tool to analyze the impact of megaprojects in the area, developed by Geocomunes and the CCMSS, members of various Maya communities denounced the deficiency and division they are subject to with this development project.

Pedro Uc, from the town of Buctzotz and member of the Assembly of Defenders of the Mayan Territory, assured that with the change of administration they expected an improvement in the conditions of the inhabitants of the region, promised in two or three previous campaigns, however, they found the news of a Mayan Train. 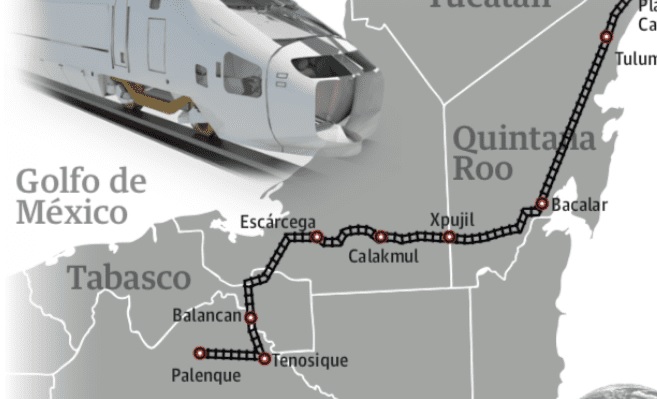 “The communities never ask for a Mayan Train. We have made the government for many different things; however, they decide this project and to give it this surname.” he said.

In addition, he denounced that for years the word “Maya” has become an “important currency” even in newspapers, but said that this only translates into the devastation of the territory, nature and the community economical development.

As a defender of the territory, Pedro demands respect for the “original people” and their ways of life, as well as the right to a consultation that truly takes into account their opinion, because historically, he accused, these have only served to meet a requirement and legitimize the megaprojects.

He denounced that as a result of the purchase of land for the construction of the Mayan Train by the National Fund for Tourism Development (Fonatur), real estate speculation has increased and it is predicted that the urban centers, which currently house 12,000 inhabitants, will expand to about 50,000.

He also said that government employees of various agencies, especially the Secretariat of Energy (Sener), are pressuring communities to give up their land and accept energy projects. The indigenous leader said that for land dispossession federal authorities use “coyotes” middle-men that offer money to sit down and listen to the characteristics of the project and then make them sign a list of assistance that then, without the villagers know, becomes a contract to buy and sell the properties.

He also indicated that these “coyotes” abuse the good faith of the communities because most of the people in that region do not speak Spanish.

Wilma Esquivel, vice-president of the “U Kuuchil K Chibalom Community Center” resident of Carrillo Puerto and member of the Indigenous Government Council, also lamented the official contempt for their culture.

The indigenous people claim that much of their culture is being swept away by the economic logic, the demands of the owners of the land, the Mayan territory that does not belong to them anymore since they have become mere employees of the tourists and industrial sector, “at what point did they excluded us from there?”

“With development” she continued, “comes other problems as well: feminicide, crime, violence and fear. The cities” Wilma pointed out, “are not made for us, they are designed for those who have money to spend. “They discriminate against us,” she said.

Wilma expressed their absolute refusal to turn their land into another Cancún, which she described as a symbol of destruction. “We have a lot to say as peoples, but they don’t ask us. They still think we are ignorant,” she lamented.

In spite of the dark panorama, Wilma called on the communities to join efforts and stop the Mayan Train project and confront what they call, “the projects of death”.

“Although for many the Mayan culture has already collapsed, we are alive; we are a living Mayan culture and we cannot allow them to destroy us” she said.

The spokespersons of the Mayan communities expressed that they are already analyzing a series of injunctions, protections and legal measures to stop the Mayan Train.