‘Send her back!’ ―Trump’s ugly plan to get reelected

WASHINGTON D.C. (Agencies) – If “lock her up” was the ultimate chant at Trump’s rallies in the 2016 campaign, the 2020 race might have a new — and ugly — counterpart. The crowd last night at the Trump´s campaign rally in North Carolina repeatedly shouted, “Send her back!” after Trump mentioned US Rep. Ilhan Omar. The head of the executive branch spent quite some time of the rally going after Omar and the three other congresswomen of color known as “the squad.” 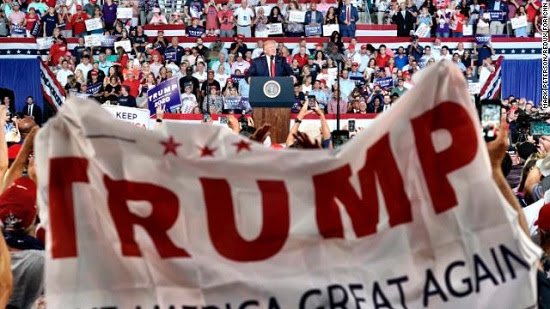 They’ve blasted the Trump administration over its handling of migrants in detention centers on the US-Mexico border. Trump said if they don’t like the policies, they can leave the country. And when the chant started, he made no effort to stop it.

In the rest of the United States, outrage and expressions of support for Rep. Ilhan Omar flooded social media after Trump’s supporters chanted “send her back” when he attacked the Minnesota Democrat at the North Carolina rally.

Trump called out Omar and three other liberal congresswomen, all of them minorities, who he says “hate our country.” He has leveled attacks against the four women, every day this week, beginning with a series of tweets on Sunday telling them to “go back” to their countries of origin that were later condemned as racist in a House resolution.

Omar, who arrived in the U.S. more than 20 years ago after her family fled war-torn Somalia, is the only one of the four congresswomen not born in the U.S. On Wednesday, Trump attacked Omar for comments she made about Israel that were condemned as anti-Semitic and remarks that were perceived as dismissive of the 9/11 terrorist attacks. He also repeated somefalse claims about Omar that have circulated online.

“And she looks down with contempt on the hard-working Americans, saying that ignorance is pervasive in many parts of this country,” Trump said.

“Send her back,” some in the crowd began to chant.

In response, Omar quoted from, “Still I Rise,” a poem by Maya Angelou, which reads, “You may kill me with your hatefulness. But still, like air, I’ll rise.”

Meanwhile, back in Washington, the House shot down an effort to impeach Trump. The vote illustrated the divide in the Democratic caucus over the issue, with 137 Dems joining all Republicans in defeating the measure. House Speaker Nancy Pelosi has resisted impeaching the President, fearing a political backlash that could cost the Democrats their House majority next year. The House also voted to hold Attorney General William Barr and Commerce Secretary Wilbur Ross in criminal contempt in a subpoena dispute related to the administration’s attempt to add a citizenship question to the 2020 census.