U.S. citizens protest in front of the United States consulate in Merida Yucatan, calling for the closure of migrant camps in their country.

MERIDA Yuc. (Times Media Mexico) – In a very unusual event for the city of Merida, a group of people, mostly Americans in a gesture of solidarity for migrants arriving to the US and being separated from their families and encarcerated, protested in front of the U.S. consulate in Mérida on Friday afternoon to demand the closure of migrant concentration centers in the United States.

Some 40 people demonstrated in front of the U.S. consulate in protest of what they call “concentration camps,” which seems to lead to alleged corruption events since these places have received $700 USD from the U.S. government for migrant children separated from their parents, but the minors are practically prisoners in the “concentration camps”. 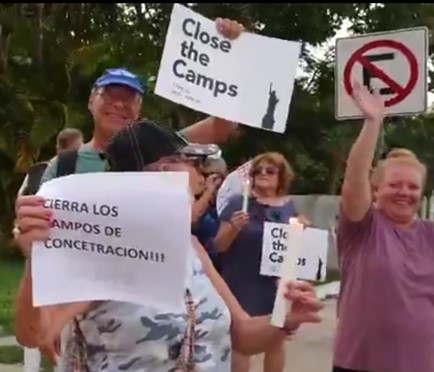 Banners and signs accompanied demonstrators chanting slogans against Donald Trump and his immigration policies, which they said violated human rights for migrants.

The demonstrators, using slogans in English and Spanish, demanded that the U.S. authorities withdraw the segregationist policies applied to detained migrants and their conditions of overcrowding and separation from their families. The complainants came with a megaphone, speakers from which they demanded that the U.S. authorities apply rules and conditions for migrant children detained in special areas for possible deportation.

In their interventions, they anticipated not being involved in any political parties, but in determining the application of human rights for migrants and their families, as well as a possible armistice for migrants detained at US-Mexico border.

A security operation was mounted at the gates of the consular headquarters with a dozen public security agents; however, the demonstrators stood in front of the building without establishing contact with the protection elements of the diplomatic headquarters.