Mexico’s Secretary of the Treasury, resigns due to “discrepancies”

(Times Media Mexico) – Mexico’s Secretary of the Treasury, Carlos Urzúa, resigned his post,  today Tuesday 09 July 2019. This was confirmed by the official himself through his Twitter account, where he shared a letter addressed to the president of Mexico, Andres Manuel Lopez Obrador: 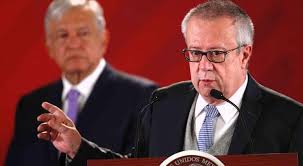 “There were many economic discrepancies,” Urzúa wrote. “Some of them because in this administration public policy decisions have been made without sufficient sustenance. I am convinced that any economic policy must be based on evidence, taking care of the various effects that it may have and free of all extremism, be it right or left,” he adds.

“However, during my term in office, the previous convictions did not find an echo”.

This resignation is a very hard blow to López Obrador’s government, whose popularity is decreasing and is increasingly questioned by the media, private initiative, political parties and national and international financial institutions, as well as a considerable drop in voters acceptance.

This story is breaking and will be updated.