MEXICO CITY (AP) — Hundreds of Mexican federal police were in open revolt Wednesday against plans to absorb them into the newly formed National Guard.

Federal police at a Mexico City command center demanded a meeting with Mexico’s security secretary, uniformed police blocked a major capital highway in front of federal police offices and yet another contingent blocked the highway between the capital and a state capital, Pachuca, for hours.

The protests came as the government was officially starting to deploy the National Guard to several states to fight crime and control immigration. They threaten to complicate the formation of a new security force that President Andrés Manuel López Obrador has bet Mexico’s future security on. 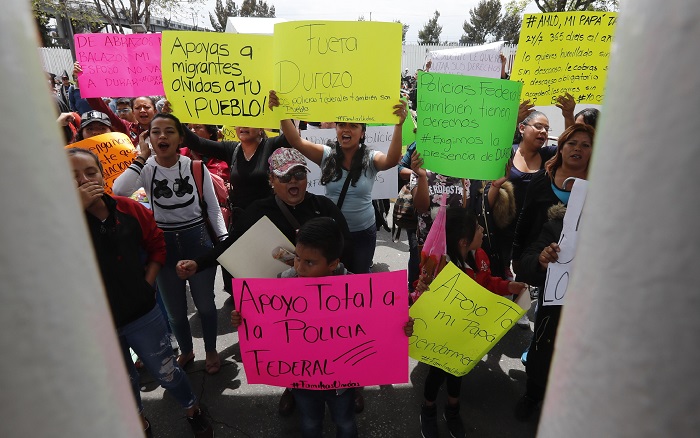 The National Guard is initially being formed by military police and federal police but is also signing up new recruits. López Obrador has been consistently dismissive of the federal police, characterizing it as a failed security force, and gave military officers the bulk of the responsibility for the National Guard.

Protesting police at the command center in the capital’s Iztapalapa borough said that their seniority, rank and benefits are not being recognized within the National Guard, which is ostensibly a civilian security force, but whose hierarchy is heavily military.

National Guard Commandant Patricia Rosalinda Trujillo Mariel, one of the few leaders of the new force who came from the federal police, was jostled by the crowd as she came to meet the protesters and asked them to put forward representatives to talk.

“I am federal police, I respect the principles of my institution and I want to have a dialogue,” Trujillo shouted over the crowd. 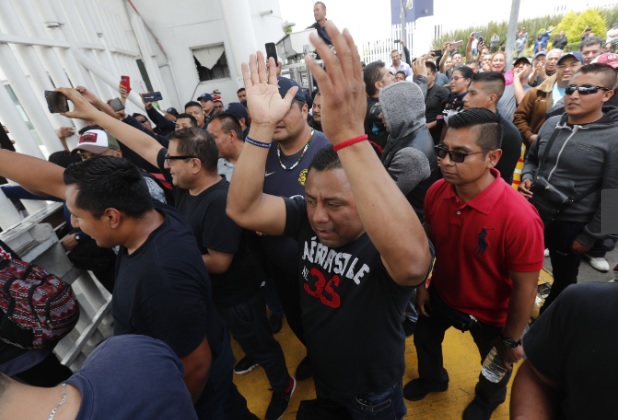 One police representative who stepped forward without identifying himself said the protesters were waiting for the arrival of Alfonso Durazo, Mexico’s security secretary, who oversees the federal police and National Guard. Trujillo said a delegation of protesters would be taken to speak with Durazo.

“We aren’t protesting, we’re just demanding our rights,” she said. “We just want them to respect our seniority, because for (members of) the army and the navy they respect it and for us as federal police they don’t.”

In front of federal police offices in Mexico City, another contingent of uniformed federal police blocked a major highway, the Periferico, backing up traffic for a time Wednesday.

And more than 100 uniformed police blocked the highway connecting the capital and Pachuca near Ecatapec. Traffic was backed up for miles in both directions. Some bus passengers walked from one side of the blockade to the other looking for transportation to carry them on.

The demonstrations also revealed a vast difference in culture between the federal police and military. When federal police officers are deployed they are typically put up in hotels. When the military is operating outside its bases, soldiers sleep wherever available and receive little compensation to cover their meals.

Last week, the newly appointed head of the National Migration Institute apologized for calling some federal police officers “fifi” or posh when they complained about difficult conditions in the effort to reduce the flow of migration through Mexico toward the United States.

Mexico sent 6,000 guard members to the southern border to assist in that effort and it has sent thousands more to its northern border to deter illegal border crossings.

López Obrador said Wednesday that no federal police would be fired and that those who qualified for the National Guard would maintain their salary and benefits. He said that joining the new force would be voluntary, but was vague about what would happen to federal police who did not.

Critics say the immigration enforcement mission could distract the force from its primary responsibility of getting a handle on violent crime.

Mexico is experiencing the highest number of murders is at least 20 years, though the rate of the killings has stabilized in recent months. For years, Mexico has relied on the military to confront organized crime, in some cases even disbanding municipal police forces because they were thoroughly infiltrated.