Finance Secretary Carlos Urzúa and Foreign Secretary Marcelo Ebrard attended this year’s annual G20 Summit in Japan on behalf of President Andrés Manuel López Obrador and, today at the conclusion of the second and last day of the Summit, they gave a remote press conference from Osaka.

The Finance Secretary took part in the forums on the global economy, international trade and the digital economy, and in the meeting of health and finance ministers on universal health coverage.

The global economy forum dealt with the importance of tariff-free and rules-based international trade, a crucial issue for the Government of Mexico at this time.

The digital economy forum addressed the erosion of the tax base that affects countries due to the growing digital economy. The challenge of taxing these activities is that they are carried out in one country, but paid in another. Mexico, together with the European Union, spoke out about the need for international legislation to avoid this tax base erosion.

The meeting for the ministers of finance and health focused on the issue of universal health coverage. Secretary Urzúa shared Mexico’s experiences, saying that the country is opting to centralize services and to use common funds for financing in order to provide better health services to all Mexicans. 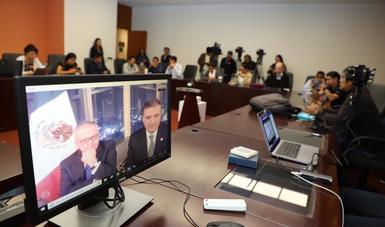 Secretary Urzúa also highlighted the importance of including the issue of anti-corruption on the G20 agenda. This is a key issue for the Government of Mexico. President Andrés Manuel López Obrador has made it clear that this is the biggest problem that must be addressed in order to create a more inclusive and just society, with economic growth. Mexico and Japan co-chaired a meeting on the topic at the Summit, and will be in charge of leading the work on this topic.

Foreign Secretary Marcelo Ebrard said that the expectation had been for a difficult Summit, due to differences on issues such as climate change and the trade dispute between the United States and China. He said that In both cases Mexico contributed to achieving a positive outcome.  As regards climate change, an agreement was reached to include in the official declaration the commitment of 19 G20 countries, including Mexico, to support ratification and implementation of the 2015 Paris Agreement. The U.S. reiterated its decision to withdraw from the Paris Agreement.

Secretary Ebrard said that trade talks between the U.S. and China would continue. This extends the timeframe of the trade dispute between the two countries, which is a positive development in that it avoids any drastic measures being taken in the short term.

The secretary stated that the G20 Summit was very important, and that Mexico participated in all of the forums to make contact with the leaders of the other 19 countries and with international organizations such as the International Monetary Fund, the World Bank, the United Nations and the OECD, among others.

Mexico’s participation was focused on explaining the country’s strategy, the main goals of the current administration, and how these goals would be achieved: by eradicating corruption from public life, reducing inequality, accelerating economic growth and creating a new model for security in the country.

Lastly, Secretary Ebrard underscored the fact that the vitally important topic of migration was raised at the Summit. Mexico’s approach to the issue was accepted, and many of the G20 members agreed with our country’s focus on addressing the causes that lead to what we call forced migration: poverty and insecurity. In that context, Mexico presented the Comprehensive Development Plan for Central America, which met with a very positive reception from various countries in support of this Mexican priority.